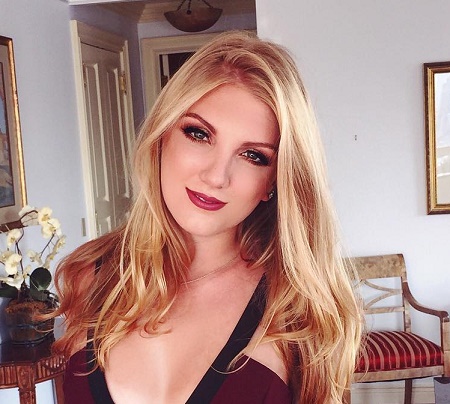 Avery Singer is an American celebrity kid known as the single daughter of Real Housewives of New York City cast member Ramona Singer and her estranged husband Mario Singer. Now, Avery is no longer a kid as she works as an analyst at the Investment Management Company. Also, since the series premiered in 2008, she has made Cameos on RHONY.

She was born on May 2nd, 1995 in New York NY United States. She has studied at Emory University in Atlanta, Georgia. She then went to study at the University of Virginia, where she received her Bachelor's degree in Economics and Sociology in 2017. As a citizen, she is American and belongs to white ethnicity.

As of now, Avery whose age is 25 is still an unmarried woman. To date, she has not revealed her love affairs in the press or in the public. So, for now, there's no exact indication of whether or not she's in a serious relationship with anyone.

On her Instagram account, she often posts cozy pictures with several guys. But until now, she has never mentioned them as her boyfriend or lover. In coronavirus (COVID-19), she may spend a lot of time with her divorced parents in the same Florida home, but she's still making time for her friends.

At the moment, Singer still stays connected to the "small number of guys. She said Dating in quarantine is definitely interesting at the Instagram show "Spilling the Quarantine." Maybe you're thinking if she's got a boyfriend, but it's not the same thing. She's happily single and enjoying her time with her girlfriends.

Recently in the midst pandemic, the pair of mother Ramona and daughter Avery tested positive for COVID-19 antibodies. Both of them found out they have the antibodies, so they donated our plasma.

Besides her love life, Avery is more concentrated on her career as she really wants to be successful financially in life. Her mother Romana also said that she chose finance 'cause she's really good with numbers. She's like me, she likes numbers."

Her Parents Divorced in 2014

Yes, her dad, Mario, 63, and mom, Ramona, 66 are no longer together. The couple who are divorced for almost five years is still is on amicable terms and happily co-parenting their daughter together.

The pair got hitched on 14 March 1992. But during their marital relationship, the Reality Star reportedly found that her husband Mario was cheating on her. In fact, she found them at the same house in the Hamptons. Mario was having an extramarital affair with a young lady Kasey Sexter, whom he dated Until 2018.

After then, they separated in January 2014 after being married for nearly 23 years. And their divorce was finalized on 24 November 2015. Despite the messy split, the ex duo has been self-isolating for two months under the same roof in Marios' house Boca Raton with their daughter, Avery.

But the RHONY's star said that they are not reunited.

How Rich is Avery Singer?

Meanwhile, Avery Singer's net worth is still under investigation but we can assume it is assumed to be around $100K. Well, she must be earings a good amount of money as a licensed financial professional in New York and New Jersey.

Whereas her mother Ramona Singer has a whopping net worth of $18 million as of early 2020. She has acquired that amount throughout her multiple business ventures and reality television star. In fact, she is said to have earned a salary of about $500 Thousand per season as a cast member of Real Housewives of New York, where Jennifer Aydin also starred.

Singer also makes a good sum as the creator of the Tru Renewal skincare line and owner of RMS Fashions. Her other businesses like the Ramona Singer Collection on the Amazon and True Faith Jewelry. In addition, she created her own wine called Ramona Pinot Grigio.