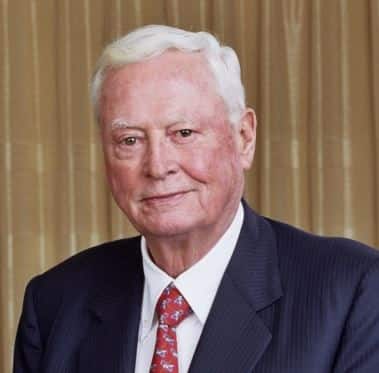 An American business magnate, Barron Hilton is one of the respected public figures in the United States. He was the second son of the great, Conrad Nicholson Hilton. Apart from the world of business, he was the philanthropist and sportsman who was the original owner of the American Football League giants, Los Angeles Chargers.

Barron was born on 23rd October 1927 in Dallas, Texas, United States. He was raised alongside three other siblings; Conrad Nicholson, Constance Francesca Hilton, and Eric Michael Hilton which are all now one of the great public figures. Previously he served in Navy during World War II as a photographer. And was a graduate student at the University of Southern California.

Businessman, Barron was a married man. He exchanged wedding vows with his longtime girlfriend, Marilyn June Hawley back in 1947. They first encounter one another back in the early 1940s.

After dating for several months they accepted one another as husband and wife in front of their families and friends. However, after enjoying impressively fifty-seven years together with his wife, Marilyn died.

Barron Hilton is the father of eight children

All of the children are noBusiw fully grown-ups and are pursuing their careers. Furthermore, He has 15 grandchildren including Paris Hilton, Conrad Hughes Hilton and Nicky Hilton Rothschild. Also, he is blessed with another four great-grandchildren at the moment.

The net worth of Barron Hilton in Billions

It's a matter of fact that, Barron was the billionaire at the time of his death. He was the owner of the $3.4 billion fortune. He left almost ninety-seven percent of his estate to his father foundation Conard N. Hilton foundation. Which is expected to grow its endowment $2.9 Billion to $6.3 Billion. In 2007 his net worth was $2.3 Billion.

Similarly, in 2011 his fortune raises up to $2.5 Billion according to Forbes. Moreover, his primary residence in Holmy Hills was the House designed for Jay Paley by Paul Williams. Also, he used to maintain a permanent suite in New York and 475,000-acre ranch,

Furthermore, his impressive thirty years in the company has brought the fame of $26 Billion back in 2007. Moreover, he still left millions and millions of fortune to his surviving family members which are just only three percent of his total fortune.

Death of Billionaire, Barron Hilton at the age of 91

On 19th September 2019, the great business tycoon, Barron died at the age of ninety-one. He looses his last breath at his home in Los Angeles due to natural causes. His son, Steven M. Hilton stated that

My father was a loving husband to our mother, Marilyn, a wonderful role model to his eight children, a loyal and generous friend, visionary businessman, respected leader and a passionate sportsman. He lived a life of great adventure and exceptional accomplishment.

I am deeply saddened by the loss of my grandfather Barron Hilton. He was a Legend, a visionary, brilliant, handsome, kind and lived a life full of accomplishment and adventure. Ever since I was a little girl I have looked up to him as a businessman.