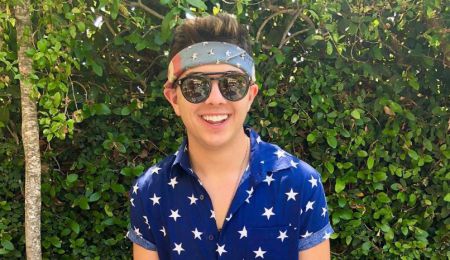 Bradley Steven Perry, an American actor who is best known as Gabe Duncan on Disney's Good Luck Charlie and Sharpay's Fabulous Adventure. He is also known for his role in the series Mighty Med.

Bradley Steven Perry was born on November 23, 1998, in California. As of 2019, Perry's age is 20, and his birth sign is Sagittarius. His parents Emery Emmanuel (father) and Brenda Joyce (mom), raised him alongside his three older sisters; Madison, Makenzie, and Justine.

Regarding his academics, he graduated from Quartz Hill High School located in Lancaster, California

Perry is not dating anyone as of 2019. Previously, he was rumored to be dating actress Ryan Newman, but the couple denied their romantic affair. When asked about if they were dating, actress Newman told them they were just friends and nothing more than that. Both Perry and Newman were on-screen child actors on Disney's sitcom, Good Luck Charlie.

Regarding Bradley's first official romantic relationship, it was with actress Sabrina Carpenter. The couple began dating in early 2014, but their affair lasted for only a year. However, they are still good friends to date.

On August 7, 2018, Bradley shared a picture with a girl who seemed to be very close to him.

As of 2019, Bradley Steven Perry has a stunning net worth of $2 million. The Good Luck Charlie actor has amassed a giant amount at a young age. The primary source of his income comes through acting in television and films.

Few of the movies in which Perry was cast has decent box-office records. To name some, his movie Old Dogs collected over $96 million, and film, The Goods: Live Hard, Sell Hard grossed over $15 million at the Box-Office.

Child actors moreover get paid a hefty sum of money up to $250,000 per episode. Bradley's per episode pay might not be in higher range, but he earns a desirable salary.

Apart from his income, he is actively involved in several charity works. He helps in raising funds for Mattel Children's Hospital. The hospital's main motto is to provide treatment to kids suffering from pediatric diseases.

The actor, in addition, helps to raise funds via his accounts. All those funds go to The Cameron Boyce Foundation.

Perry began his career at the early age of 10. He portrayed the small role in the movies like Choose Connor and Magnificent Max.

The actor similarly made his television debut on the CBS crime-drama, Without a Trace. Later, he also appeared as Kaz on the Disney XD show Mighty Med alongside Jake Short and Paris Berelc in 2013.

In 2017, he appeared in Descendants: Wicked World, providing his voice for a character named Zevon. To date, Perry has been nominated for Young Artist Award for his role as Gabe Duncan in 2011 and 2012.