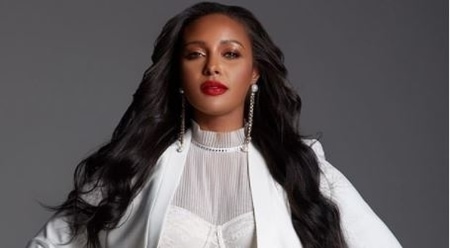 Brandi Rhodes, who is also known by her ring name Eden Stiles is a famous American professional wrestler, businesswoman as well as a television personality. Currently, she is the Chief Brand Officer of professional wrestling promotion, All Elite Wrestling, and the ring-announcer of WWE.

The pro-female wrestler, Brandi was born on 23 June 1983, in Canton, Michigan, the USA, under the sun sign, Cancer. Moreover, she belongs to the Afro-American ethnicity and holds an American nationality. If you're curious to know more about her married life, then read along.

The 36-years-old wrestler, Brandi, is a married woman as of 2020. She is happily wedded to the love of her life, Cody Rhodes, who is a famous professional wrestler and executive vice president of All Elite Wrestling. Likewise, he is also the son of WWE Hall of Famer, Dusty Rhodes and his wife, Michelle Rubio.

The couple shares their wedding vows in September 2013 in a private ceremony. Brandi, however, shared some pictures of their big day on her Twitter account. The duo looked dashing on their wedding attire and also the venue for the ceremony looked amazing.

They first met at the Union Station Hotel and hit it off immediately. Their first date was at waffle house and their second date was a sit-down dinner date where they had seasonal pumpkin pancakes.

Currently, she is living happily without divorce rumors and controversies regarding their love life. Moreover, she often uploads a picture of them on her Instagram.

Back in 2016, she shared a piece of her dating life with Cody in an interview. As she is currently the wife of Cody, the two were connected quickly as they shared the same profession. Similarly, the couple was engaged pretty swiftly and tied the knot soon.

But, Brandi says that,

"My moment where I knew this was the person for me was when Cody asked me on a date to Halloween Horror Night at Universal Studios."

She wanted to go to Halloween Horror Night for years, and nobody has ever asked her on a date to Halloween. However, Cody asked her out in Halloween party on their second or third date, which made her feel special, and she considers it as one of the best things that have happened.

Net Worth Of Brandi Rhodes

Being a professional and famous wrestler, she has accumulated a hefty amount of money until now. Brandi's net worth is estimated at around $1 Million as of 2020 which is similar to Randy Orton's wife, Samantha Speno.

Further, she has appeared on the TV series, WAGS Atlanta, and has worked as a news anchor and figure skater, before wrestling career. From all of her previous profession and jobs, she must've added a good income in her fortune. Currently, she is the Chief Executive at All Elite Wrestling and must be making handsome earnings.

Keep Visiting Us at Married Celeb for more updates on WWE wrestlers!!!