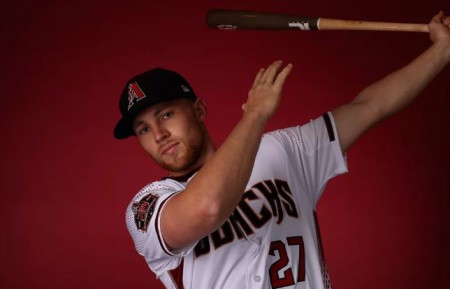 The 27-year-old, Brandon Drury is an American professional baseball third baseman. He currently plays for the Toronto Blue Jays of Major League Baseball (MLB).  The talented sportsman made his MLB debut in 2015 for the Arizona Diamondbacks.

Drury who was born on August 21, 1992, in Oregon attended Grants Pass High School, where he played shortstop for the school's baseball team.

Does Brandon Drury have a Girlfriend?

Brandon Drury at the age of 27 is possibly living a single and unmarried life. He hasn't revealed any information about his relationship. Neither, he has shared any pictures with a lady whom can be thought as his girlfriend.

Off the field, Brandon has never been spotted with any lady in public who is assumed to be his wife or girlfriend. He might be searching for a suitable partner, but at the moment, Drury is focused on building his professional career.

Further, it seems Drury prefers to maintain a low-key life when it comes to romance and affairs. Not much information is known apart from his baseball career.

The Toronto Blue Jays' third baseman, Mr. Brandon has a net worth of over $1 million. The primary source of Drury’s income is his professional baseball career. Further, he has not mentioned any business ventures and an endorsement deal with any brands.

In the 2010 Major League Baseball draft, the Atlanta Braves selected Drury in the 13th round. Further, he made his professional debut for the Gulf Coast Braves.

On January 24, 2013, Drury was traded to Arizona Diamondbacks. In August of 2014, he was promoted up to Mobile BayBears of the Class AA Southern League.

Again, on 1st September, he returns to Diamondbacks to make his major league debut. Drury played professionally three seasons for Diamondbacks before switching to another club.

On July 26, 2018, the Yankees traded Drury to the Toronto Blue Jays alongside and Billy McKinney for J. A. Happ. Furthermore, on 7th August he was placed on the disabled list with an injured left hand, eight games into his tenure with the Blue Jays.

At the moment, Drury is focusing on building his professional career. In the coming future, his earnings and salaries will surely increase. He also admired Chipper Jones.