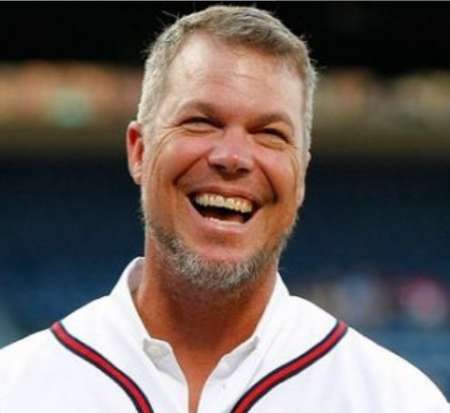 In the sports world, Chipper Jones, a former baseball player is a name who is adored by many of the players and followers. Here we bring you the career along with affair, love, and recognition of the famed retired Major League Baseball (MLB) player Chipper Jones Jr.

The MLB player was born Larry Wayne "Chipper" Jones Jr in DeLand, Florida, on April 24, 1972. He is the son of a teacher Larry Wayne Jones Sr (father) and Lynne Jones (mother).

Concerning education, Jones attended Bolles School in Jacksonville from where he started playing for the American Legion Baseball. Chipper also played college baseball at the University of Miami.

In A Marital Relationship With Taylor Higgins

The 48 aged sports personality is in the happiest marital relationship with Taylor Higgins. Jones's beloved wife Higgins is the former playboy model. Taylor and Chipper dated for several years and merrily tied the wedding knot on June 14, 2015, in the Bahamas.

Since the wedding day, the husband-wife duo is sharing a healthy bond as a perfect married partner. As of now, Chipper and his wife Taylor are celebrating their five-year marriage anniversary blissfully with zero sign of separation.

As of now, the Jones brothers are living contently with their celebrated and loving parents. Cutler and Cooper are also gaining media attraction as celebrity kids. Additionally, they also feature on most of the post updated by their parents on their social sites.

Before marrying Taylor, Chipper was a married man. He shared the nuptial knot with his first wife, Karin Fulford in 1992. Jones and Fulford first met while he was playing with the Braves class A affiliate in Macon, Georgia.

From the marital relationship, Karin and Chipper shared a son named Matthew Jones in 1997. The former married partner was living merrily. However, in 2000 the couple divorced.

Likewise, Jones started seeing Sharon Logonov after the first unsuccessful marriage. Much to surprise, he tied the knot and started his second marital life with his wife Sharon in Florida in March 2000. From their nuptials, they had three children named Larry Wayne III, Tristen Jones, and Shea Jones.

The Jones family shared a happy life for over a decade until Jones and Logonov filed a mutually agreed divorce. The former couple separated in June of 2012 and later the divorce was finalized in November 2012.

Chipper's net worth is predicted to be more than his official asset. He was first drafted by Atlanta Braves to a contract with a signing bonus worth $275,000. In the year 2000, he signed a deal valued at $90 million for six years. Following his career in MLB, he used to earn a salary of over $13 million.

As of early 2021, Chipper's overall net worth is estimated to be over $110 million. Jones comes under the tag of highest-earning player with an amount of over $168,552,133. He also receives a hefty sum of money for his co-production business.

Chipper Jones is a co-host and co-owner of the television show Major League Bowhunter that airs on the Sportsman Channel. The 2018 National Baseball Hall of Fame inducted Chipper was also hired by ESPN to be a color analyst on March 1, 2020.

Jones has a fan base of over 139 thousand on his official Instagram page (realcj10). He handles a follower of over 1.1 million on his Twitter profile. Similarly, Jones has over 196,520 followers on his Facebook account.