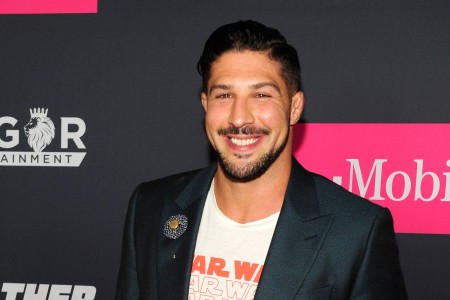 Brendan Schaub is a familiar name in the world of Mixed Martial Arts (MMA). He signed with the Ultimate Fighting Championship (UFC) from 2009-2014 and officially retired from MMA in 2015. After a fighting career, Brendan chose stand-up comedy as his new profession.

The 37-year-old Schaub currently works as a podcast host. Further, he released his first career comedy special, You'd Be Surprised, in 2019. Additionally, the former fighting champion is also a father of two lovely kids.

The Fighter and the Kid podcast host is a married man. Brendan Schaub's wife is none other than the lovely host/model/actress, Joanna Zanella. They first met around 2012.

After six years of dating, the couple eloped and exchanged their wedding vows on May 24, 2019. Their ceremony was so intimate that the only witness to their union was Joanna's brother. At the time, Joanna was two months pregnant with her second child.

Brendan and Joanna engaged in 2017 and are yet to have a big public wedding. However, they are already parents of two adorable kids. Their first son, Tiger Pax Schaub, was born on February 21, 2016.

Further, their second son, Boston Schaub, was born on November 26, 2019. The kids are often seen on their parents' social media.

Has Brendan and Joanna Separated?

Well, social media sometimes destroy relationships instead of building them. As mentioned, Brendan and his wife, Joanna, eloped and tied their wedding knot. But are they still together?

Recently, there were rumors that Schaub cheated his wife, Joanna, for another woman. Apparently, the woman with whom Brendan hooked up leaked their private messages. Afterward, Joanna became furious and left her husband. However, the rumors could be entirely false. Both Brendan and Joanna hasn't said anything about the split.

Know a little about Joanna Zanella

The 32-year-old Joanna Zanella is an American tv show host and actress. She won the Gabriel's Award in 2005 for her lead role in a South American soap opera. Further, she is the winner of Miss Mexico Fox Sports USA at the 2009 Fox Sports Pageant.

She has appeared in national tv stints for Kraft, JcPenny, Nickelodeon, and Wells Fargo Bank. Zanella lived in Mexico until ten and returned to California with her family.

The former UFC fighter, Brendan Schaub, has a net worth of $2 million, similar to another famous MMA fighter, Israel Adesanya. Since his retirement, Schaub has been busy in other lucrative endeavors. He is now a famous stand-up comedian, podcast host, and media personality.

At present, Schaub hosts two podcasts titled, The Warrior and The Kid (since 2013) and Below the Belt with Brendan Schaub (since 2016). Apart from that, he frequently makes appearances in movies and television shows.

During the fight week, Schaub would earn $10,000 per fight in Reebok money, but in the past, he was making upto $100,000 in sponsors per contest. Well, he announced his retirement from the UFC while appearing on the Joe Rogan podcast.

During his MMA career, Schaub won 10 fights and with five losses. Moreover, Schaub owned a two-story home in West L.A. He sold the house for $2.17 million in 2019. Schaub also has merchandise called Thicccboy.

Brendan Peter Schaub was born on March 18, 1983, in Colorado, the United States to parents, Debra Schaub (mother), and Peter Schaub (father). His mother is English, while his father is an American.

Further, Brendan has a mixed ancestry of German, Italian, and English. Brendan's father is a second-degree black belt in taekwondo.