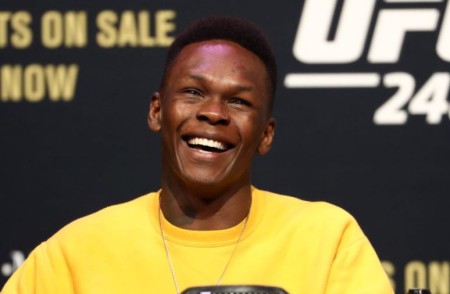 Israel Adesanya is one of the world's best mixed martial arts strikers. He is regarded as one of the best fighters in sports history as well. Israel is a Nigerian-born New Zealand professional Mixed Martial Artist. Often called "The Last Stylebender," Israel is the fastest rising superstar.

Th 6 feet-4 inch Adesanya is currently signed to the Ultimate Fighting Championship (UFC), where he is the UFC Middleweight Champion. He has also competed in Kickboxing and boxing and is ranked #4 in the UFC men's pound-for-pound rankings.

The 31-year-old MMA fighter very well knows to keep his personal matters very private. He doesn't speak about his relationship and love life. However, Israel is very fond of hanging out with his female fans. Also, he can be spotted enjoying with different women. Unlike Adesanya, Tim Elliott has a girlfriend.

While some people claim he is gay, Israel's sexual orientation is certainly straight. An online forum once posted a video of him sharing a bathtub with an unidentified woman. Further, Israel was seen with the same woman posing for a portrait after defeating Robert Whittaker on October 2019.

Israel is so much a secretive person that none of his past romantic entanglements have surfaced in public. He is also an unmarried man. At present, he might be possibly single, or he might be dating a woman in secret. Well, who knows?

The fastest rising superstar in the MMA business, Israel Adesanya, has a net worth of $2 million. Recently, on March 7, 2020, he won $540,000 after defeating Yoel Romero. The source of his wealth includes UFC earnings, sponsorships, and business ventures. Jon Jones also has a impressive net worth.

Adesanya has tied up with Engage for merchandise. Additionally, he endorses Peak Milk and Reebok, which he got after becoming the UFC interim Champion.

Israel owns a clothing business called Engage Apparel. He has a soft spot for luxury cars. The fighter owns a Range Rover and a Ferrari whose combined value is over $700,000. Israel's next match is against Paulo Costa, scheduled on September 27, 2020, at UFC 253.

When Israel was 10, his family enrolled him in an all-white school in New Zealand from Nigeria. In his school, Israel was the only black kid in his class. He was bullied continuously, but later, he learned to fight. Recalling his childhood bully, Israel said:

'It was weird being the only black kid around. I had to defend myself a lot. I'm cheeky, I'm annoying so I'd always get myself into trouble, and eventually, I had to learn how to defend myself. That's when my search for fighting came through.'

Israel further shared one day, he cried in front of the mirror after being picked on. Afterward, he gave himself a pep motivation talk. Since then, he has been doing self-talks and has excelled at bragging his confidence.

Israel Mobolaji Adesanya was born on July 29, 1989, in Lagos, Nigeria. His mother, Taiwo Adesanya, is a nurse while his father, Femi Adesanya, is an accountant. Israel has four siblings named Deborah, David, Samuel, and Bolu.

At 10, Israel moved to Rotorua, New Zealand, because of his parents wanting their children to pursue a better education. At a young age, Adesanya developed a passion for dance. He has a blue belt in Brazilian Jiu-Jitsu. Do you know he was partly inspired by Tony Jaa's action film, Ong-Bak?

Throughout his career, Adesanya has won several awards. He is the current UFC Middleweight Champion who has won the Performance of the Night four times.

Lesser-Known Facts about the Star Fighter

Adensayan began with a humble background. He is known as one of the hottest men in the business with a rugged body structure. Before boxing, he regularly participated in New Zealand dance contests.

Israel is a fan of anime and wants to start an anime production company. His nickname "The Last Stylebender" is a reference to an avatar: The Last Airbender, a collection of cartoons inspired by anime.