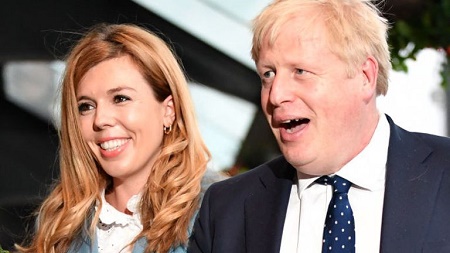 The Prime Minister of the United Kingdom, Boris Johnson and his other half, Carrie Symonds are very pleased to announce that they are together expecting their first child. They're going to wed this year in spring, while their kid is expected to arrive in the summer.

On Saturday 29 February 2020, a Downing Street spokesperson, 31, posted an image with Boris with a surprising caption on her private Instagram account. She captioned: "I wouldn't normally post this kind of thing on here, but I wanted my friends to find out from me on. "Many of you already know, but for my friends that still don't, we got engaged at the end of last year, and we've got a baby hatching early summer.

Thus, a post from Symonds reveals they're engaged at the end of last year and are incredibly blessed to have each other.

Likewise, Mr. Johnson, 55, and Ms. Symonds, 31, are living together at 10 Downing Street in July 2019 since the Conservative Party leader took office. A former spokeswoman is Johnson's first unmarried wife to live openly with a British leader in recent history or 174 years as per BBC.

More interestingly, the unmarried couple has their own romantic names for each other, with her reportedly naming him ' Bozzie Bear, ' while he calls her ' Otter. '

Added to that, the couple is sharing a puppy, Dilyn, claiming that during the election campaign he helped to keep down its tension. They actually chose to live at No 11 Downing Street's larger four-bedroom flat, instead of the smaller official two-bedroom residence at No 10.

Before tying the knot with his sweetheart, Carrie, PM married twice in his life. His first wife is Allegra Mostyn-Owen whom he shared the matrimony vows from 1987 to 1993. Then 12 days later after the divorce, he married the daughter of journalist and broadcaster Charles Wheeler, Marina Wheeler in February.

After over three decades of marriage, Johnson and Wheeler got separated in September 2018 and finalized a divorce settlement in February 2020. Additionally, PM, Johnson had a love affair with Spectator columnist, Petronella Wyatt from 2000 to 2004.