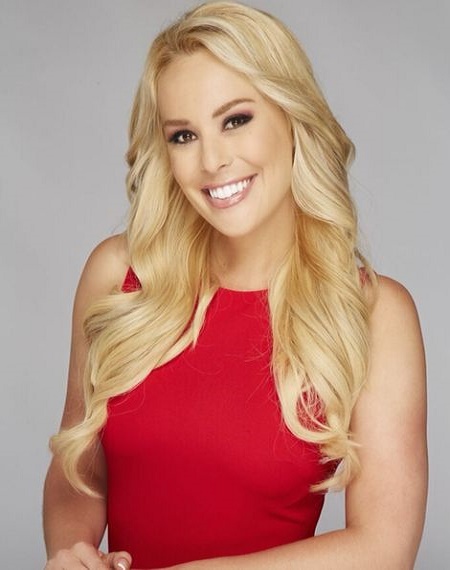 You are passionate about the media and journalism? If so, you might have heard the former ESPN reporter, Britt McHenry. Well, she is an American sports journalist who is currently serving on Fox News.

Sports anchor, Britt McHenry was born on 28th May 1986 as Brittany May McHenry to the American parents in Mount Holly Township, New Jersey. She holds American citizenship and is of North American ethnicity.

Britt McHenry, who stands at the height of 5 feet 10 inches, has always remained pretty secretive when it comes to talking to the media about her love life. Therefore, there are no more specifics details now whether she is in any serious relationship with her boyfriend or not.

However, there was a rumor that the former ESPN announcer had a love affair with her tennis player boyfriend, Tennys Sandgren. Not only this but Britt also once revealed that she and Sandgren first knew each other after being followers of each other.

Mc Henry and Sandgren's first meetings was in Paris when Sandgren played in the French Open, the first round being knocked out. From there, TV reporter claimed she accompanied Sandgren with stops at Wimbledon and most recently Winston-Salem through an injury-plagued season.

Nevertheless, the couple never admitted their love relationship with the public or media. From now on there are no actual data that they still dating each other or not.

On April 16, 2015, McHenry alleged controversy over verbal abuse. After a video of her verbally berating a towing company employee, Gina Mullins, using foul language released by LiveLeak, the ESPN network  suspended her for a week.

She later apologized in a tweet and wrote that she had let her feelings make her better, stating:

"In an intense and stressful moment, I allowed my emotions to get the best of me and said some insulting and regrettable things... I am so sorry for my actions and will learn from this mistake."

The towing company issued a statement because of the accident saying they did not want McHenry to be suspended or fired.

Besides this, the native and former ESPN personality filed a lawsuit in U.S. District Court in Manhattan against Fox News contributor George Murdoch, known as Tyrus. On Tuesday, December Brett claimed that she received unwanted and unsolicited text message from Murdoch.

Taking about her academic qualification, Britt McHenry completes her graduation from Satellite High School in Satellite Beach Florida in 2004 and went to study at Stetson University. At the two universities, she played for soccer team Hatters. Likewise, she also attended the Northwestern University Medill School of Journalism and started writing news in Chicago.

After graduation, news reporter initiated her journalism career by working as a sports journalist for ABC Television affiliated WJLA-TV and fill- in a host. On 7th March, she ABC and joined ESPN, a Washington-based bureau reporter and worked for various shows including Outside the Lines, NFL Live, Baseball Tonight and SportsCenter.

Britt announced she had been fired by ESPN on 27 April 2017, with the NFL Draft being her last assignment and also said she was white and paid too much. Currently, she is serving for FOX News as a commentator.

Britt McHenry is an American sports reporter who has a staggering net worth of $1.4 million as of 2019. Likewise, the primary source of her income or earning is her professional career as a journalist.

McHenry is currently working as a commentator for Fox News Channel. So, her annual salary is between $60,330 to $85,000, compared to Ellison Barber and Lisa Marie Boothe. In fact, she had previously served on ESPN so that she could be paid $85,000 by ESPN.

Apart from a career in journalism, NBC reporter is interested in some works of charity and social service. Mc Henry has therefore donated to a number of social services and non-profitable charities and programs.

To know about your favorite NBC journalist, visit Marriedceleb.