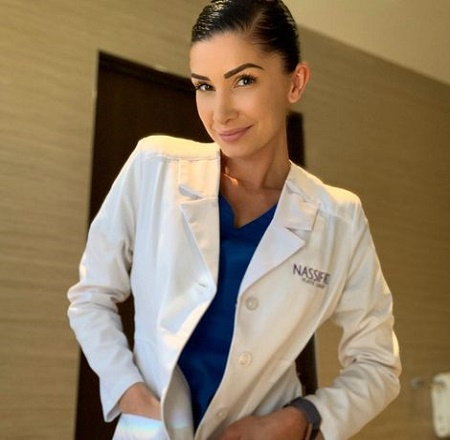 Brittany Pattakos came to fame as a second wife to plastic surgeon Dr. Paul Nassif. By profession, she is a CoolSculpting expert in the field of medicine. Also, Pattakos is a Fitness Enthusiast, and Instagram Personality from Los Angeles, California.

Born in the year 1991 in the United States of America, Brittany holds American citizenship and is of white ethnicity/race. As of 2019, she is around 28 years.

Medical assistant Brittany Pattakos, 28 and physician, 57, Nassif, walked down the wedding aisle on September 28, 2019. Their private function was held in Los Angeles on Saturday at St. Nicholas Antiochian Orthodox Church.

Their big celebration, however, was held on the Greek island of Santorini on October 6, among 65 guests surrounded the newly married couple at the romantic reception. Moreover, Brittany said in the events.

“Paul and I are incredibly grateful to have family and friends from around the world join us in the blessing of our marriage here in Santorini, Greece. We are equally as thankful for the family we had at our official wedding ceremony in Los Angeles on September 28th, 2019.”

On the big day, the bride wore a backless white lace gown and sparkling headpiece, while the groom stunned sleek in a light grey suit with a pink tie in the reception.

When Brittany and Nassif started to date?

The couple was first spotted together in July 2017. They also have a considerable age gap where M.D. Paul is 29 years older than Pattakos. More to that, the love birds prove, age is just a number, and you didn't require a perfect age to match your partner.

In fact, on June 1, when Botched's Dr. proposed to Pattakos a few days before his birthday, the pair shared a declaration of engagement. On Instagram, Paul shared an engagement video stating the caption. "This weekend, I found out that with my soulmate, I can spend the rest of my life. # SheSaidYes,"

In the post, the duo capturing on a boat ride where Nassif falls to a knee approaching Brittany, "will you marry me?". Then a CoolSculpting specialist Pattakos accepts the proposal.

Similarly, Pattakos also raved about the engagement on Instagram and said," Best day of my life! I get to marry my best friend!".

Lebanese-American plastic surgeon was previously wedded to his former wife, Adrienne Maloof. His ex-spouse is a reality star best known for Real Housewives of Beverly Hills. Moreover, the couple tied the knot in 2002, but they divorced in 2012 after 10 years of marital life.

The separation of Dr. and Maloof was quite unpleasant and involved a bitter battle of custody. They have a much more friendly relationship since then. In 2015 with Radar Online, Nassif stated:

"One thing that Adrienne and I have done, since time does really take care of things, our relationship now, especially because we have three beautiful boys, is actually quite good."

The former lovebirds are still on good terms even after the split. Not only this, but his current wife also shares friendly terms with Adrienne as they had the first meeting on the second date of Pattakos and Nassif.

Brittany also shares a healthy equation with Nassif kids. It is not wrong to say, Doctor's second wife has a friendly relationship with his former wives and children.

After Nassif and Adrienne divorced, kids started living with their mother, but the couple shared joint custody.

Working in the medical field for several years, Brittany Pattakos might earn a good amount of fortune herself. Her net worth lies between $300 thousand to $500 thousand as of 2019.

On the other hand, her renowned reconstructive and skilled facial plastic surgeon's husband, Paul S. Nassif, M.D., is famous for co-hosting the E! reality series Botched with Dr. Terry Dubrow. He has a whopping net worth of $14 million as of 2019, which he gathers this massive amount of wealth from his specialty in rhinoplasty.

Paul also featured on E! 's show Dr. 90210, and the first three seasons of The Real Housewives of Beverly Hills, where his ex-wife Adrienne Maloof was a main cast member. With such a successful career, Paul is considered one of the most well-reputable highest-paid doctors in the United States.

Now, Nassif reportedly makes $2.26 Million per year or $188,611.11 per month or $43,525.64 per week. Further, he earns $100,000 from the surgeries on Botched in real life. Besides, he is a member of the American Society for Aesthetic Plastic Surgery and also appeared on various media outlets to discuss cosmetic surgery.