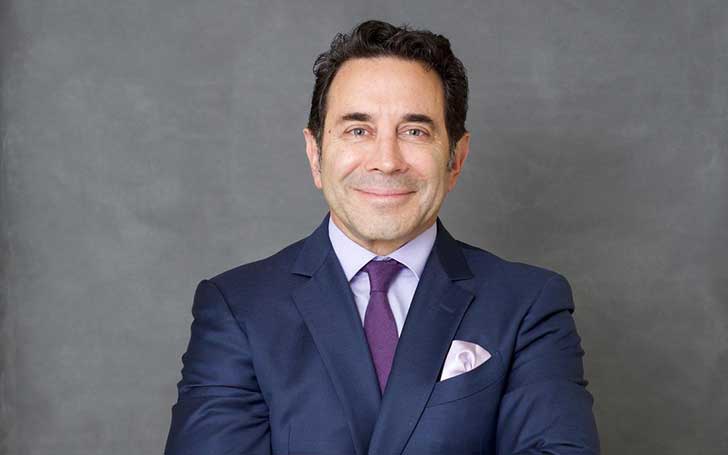 Paul Nassif is a Lebanese-American plastic surgeon and television personality who gained rapid fame for being the co-host of the plastic surgery-themed series, Botched. Likewise, he is also a member of the  American Society for Aesthetic Plastic Surgery.

A renowned plastic surgeon is now sparking his love life with her new girlfriend turned fiance, Brittany Pattakos. Since 2018, the couple is together and living a happy life together for nearly two years.

Paul's most important thing in life is to find a perfect partner like Brittany who has always supported and encouraged each step of his career. After divorce with his former wife Adrienne, Nassif is now engaged with his finance Pattakos on 1st of June 2019.

Similarly on 1st June 2019 on Saturday, the E! personality shared the news with fans as he uploaded footage of the proposal on a Duffy boat ride.  He claimed that he found out to spend the rest of his life this weekend with his soulmate.

In addition to the picturesque boat ride, Dr. Nassif strategically put a "Brittany, will you marry me?" sign on an overpass.

On 7th June 2018, Brittany shared the cozy shot of them enjoying then Pual's birthday at Bellagio Las Vegas whereas Pual also captured a photo on the day of Valentine Day's on 15th February.

This talented and good looking plastic Surgeon Paul Nassif is former husand of Adrienne Maloof, who is co-owner of many business holdings of Maloof Companies.

Nassif and Adrienne walked down the wedding aisle on 2nd May 2002 and enjoyed their married life for one decade. Later, on July 2012, Paul filed for legal separation and after a month, citing some irreconcilable differences, he officially filed for divorced which finalized on 8th November 2012.

Paul Nassif is proud dad of three children with his first wife, Adrienne. The couple welcomed their first son, Gavin Nassif on 2003 and after three years, they were blessed with twins sons, Colin Nassif and Christian Nassif.

Allegation of Physical Abuse to his Son

After filing a divorce with Maloff in August 2012, Paul was accused of physical abuse to his son, Collin in September. According to his then-wife, Nassif choked Collin and pulled him out of the bathtub. She also added,

"He slapped him on his wet bare bottom."

As a result, Paul was ordered to maintained 100 yards distance from his wife and kids until the next hearing in October. He even forced to move out of the couple's Beverly Hills home.

On the other hand, Doctor's legal team completely denies the allegation and his lawyer, Lisa Meyer said, all the accusations are "gamesmanship," she also told,

"Adrienne wasn't present during either the alleged choking or bath time incident."

After months of disputes, Paul and Adrienne finally came into peace and decided to share the joint custody of their three children. Currently, his kids are living with their mom, but Paul also never misses a chance to love and support them. More to that, his sons also share healthy equation with his now-girlfriend, Brittany

Paul Nassif is an American plastic surgeon and television personality who has a net worth of  $14 million as of 2019. Likewise, he summons a significant part of his earnings or income from his specialty in rhinoplasty.

Born and raised in Los Angeles, California, Paul Nassif is pretty close to his family members and often shares pictures with them on social sites.

Nassif studied Loyola High School in Los Angeles, USA and then earned his diploma from the University of Southern California in 1984. After graduation, Paul joined the University of Health Sciences/Chicago Medical School for his medical education.

Nassif initiated his career as an intern at the University of New Mexico Health Sciences Center and compelled himself for facial operation among those mandatory doctors. Besides, he also became popular as a video personality.

Likewise, Paul has worked in number media outlets to discuss aesthetic surgery such as Entertainment Tonight, Good Morning America, People, USA Today, Los Angeles Times, Associated Press, and The Wall Street Journal. However, he came to fame as the co-host of the E!'s plastic surgery-themed reality series, Botched where he worked alongside Dr. Terry Dubrow.

In addition, Dr, Surgeon also appeared on Entertainment Tonight along with Good Morning America.  Recently, he released this huge announcement of his brand new skincare line, As If by Nassif on the 16th of August 2019.