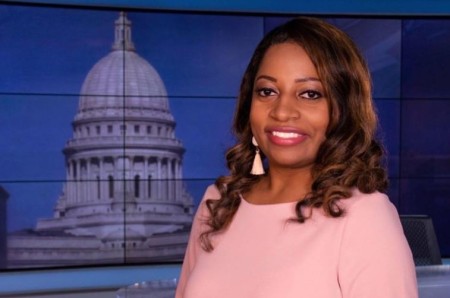 Bilingual news reporter, Brittney Ermon is well known for her full professional proficiency in both Spanish and English. She is also the former reporter for the news broadcasting media, Indiana Public Radio. For her performance, she received an Indiana Broadcasters Association Scholarship and placed 2nd at the Presidential Election TV coverage competition.

Ermon was born in the United States of America and holds an American citizenship. More to that, she hails from African-American ethnic background. So, what is happening in her life, is she dating someone or married now? Let's take a view of Ermon's personal life.

News reporter, Ermon is reportedly single and keeps her intimate details close to herself. Despite being a media personality, she isn't much familiar with expressing her personal life.

Brittney is on the top of her news career and working on getting success in her reporting work so that she prefers to work hard every day. She is currently busy on her new coverage projects, which might be the reason why she isn't married until now.

Coming up to Brittany's social life, she is quite active on Twitter, where she used to post a day to day reporting and stories. On November 2014, she was seen with sports director Mike Jocko Jacques at the Badger Bash of the Season in Wisconsin.

Salary and Net worth

Brittney Ermon has collected a net worth of $350 Thousand as of 2019. She is earning a substantial income from her profession. Similarly, a news reporter at WMTV NBC 15 receives an average payroll of $46,100 per year. So, her earnings as a reporter at WMTV channel is reportedly around $60,000.

Ermon is currently working for the news network, WMTV NBC 15, where she covers news and stories in different languages about people in various types of communities. Likewise, Sierra Gillespie and Amy Pflugshaupt also work on the same channel.

Actively Reporting in the Field of News

Bilingual reporter Brittany started her career as a feature writer for the award-winning national student newspaper, The Ball State Daily News, in August 2013. After working for over a year, she began to host a news program, Connections Live Show, situated in Muncie, Indiana.

Ermon further joined as a intern at a news broadcasting media, Homewood-Flossmoor Chronicle, in June 2016. She also worked as a news director at the radio news program, WCRD 91.3 FM, from 2013 to 2017.

Brittany then enrolled at Indiana Public Radio program as a news reporter and served there for more than a year. She also interned at various news channels, including Wish-TV, NewsLink Indiana Television, and Journalism Writing Center.

As a prolific news reporter, Brittany earned various honors and accolades for her reporting work. In May 2016, she participated in the Statewide Television Broadcasting Competition and placed 2nd runner-up.