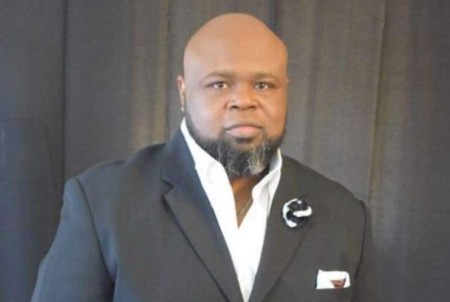 Fans who loved the 60s and 70s music might be familiar with The Temptations, an American vocal group. The band's one-time lead singer, Bruce Williamson, achieved greater success in his lifetime. Unfortunately, he died at age 49 due to complications from COVID-19.

Williamson was an American R&B and soul singer. He started singing at church choirs from a young age. Throughout his career, Bruce sang gospel music.

The late singer, preferably, kept his personal life behind the limelight. There is not much information about whom he was married to or how many kids he left behind.

Multiple tabloids report that Williamson was a divorced man. As per sources, he was married to Sherisa Khiev from 2013-2018. Although divorced, Bruce maintained a healthy relationship with his ex-wife until his demise.

After Williamson's death, his son, Bruce Alan Williamson Jr., posted a condolence message for his father. It is said that the late singer had two more sons apart from Bruce Alan, but there is no info about them.

Williamson, who joined The Temptations in 2006, continued soul music along with R&B and gospel. His primary source of income was his career as a musician, singer, and songwriter.

Additionally, Bruce used to perform on famous Las Vegas clubs and landmarks. Also, he collected a hefty sum of money from tours as well. Meleasa Houghton is also a renowned gospel singer.

Since the 1990s, Willamson was eager to join the legendary music group. However, he got the chance after a decade and gained applaud from fans and listeners. Like Bruce, Stacy Lattisaw, a former R&B singer, later continued as a gospel singer.

In February 2008, Williamson performed with The Temptations at the White House during a celebration of African-American history month.

Williamson appeared on the group's album, Back to Front and Still Here. In 2015 he left the group but continued his solo career. Later, he joined the vocal trio Sons of Soul, appearing at the House of Blues Gospel Brunch.

Bruce had a history of health problems. Do you know he left The Temptations because of his weight issues? In early 2020, Williamson went through a successful gall bladder surgery. However, he was diagnosed with COVID-19 in August 2020.

Bruce was admitted to Mountain View Hospital in Las Vegas. Unfortunately, he died from COVID-19 complications on September 6, 2020. His son, Bruce Alan Williamson Jr., verified his father's death through a Facebook post.

He wrote: "There are no words in the world that can explain how I feel right now," he added, "I love you, Daddy, thank you for being amazing thanks to you for being Who You Are I pray to God, and we're going to meet again."

At a young age, Bruce started singing in church groups. The details about his family life and educational background are not known.