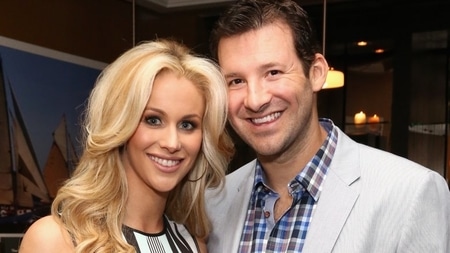 Tony Romo has not just found success in his professional career but also his personal life. He tied the knot with Candice Crawford, and since then, the smile on his face has not gone down.

On May 28, 2011, the Cowboys' fans witnessed their quarterback getting hitched. The congratulatory message could not stop flowing on their social media. Now, let's know more about their wedding.

In front of 600 guests, Tony and Candice exchanged their wedding vows. The wedding venue was filled with Cowboys players, owner Jerry Jones, and many other loved ones. For the big day, the couple selected a historic building in the city's oak lawn neighborhood in Dallas, Texas.

The duo first locked eyes with each other in 2009, while Crawford was still working as a journalist. They went out for a couple of dates and finally decided that they are right for each other. Before the wedding, in 2010, Romo proposed Candice with an 8-carat yellow diamond engagement ring.

With the music playing in the background, Candice walked down the aisle with her father. Her bridesmaids all arrived before in a Badgley Mischka dress. It looked like the whole venue was taken out of some romantic movie.

The lights were wrapped around several trees, and to heightened the mood, the band started playing Beyond the sea and Let's Get Lost.

Their Married Life and Children

Former Miss Missouri is currently enjoying a responsibility to raise three kids. After their marriage in 2011, the couple welcomes three children within six years.

Crawford gave birth to Rivers Romo (born on March 18, 2014), and Hawkins Crawford Romo (born on April 9, 2012). Their youngest child, Jones Romo, was born in 2017. Candice regularly posts pictures of her hubby and her children on her Instagram account.

Talking with ET, Romo said he wants to try for the fourth child, but this time, a girl.

In an interview with ET, Tony said,

"Oh, it's super exciting!. My third boy, you know, so, building my own basketball team here- getting close... I think the wife might want to stop at this point, but we'll push her again in a year or two".

He, furthermore, noted that moms want to hold the baby, and when they grow up, they want to hold another one.

Before getting hitched with Crawford in 2011, the former NFL player dated quite a few celebrities. Previously, he dated Jessica Simpson and Carrie Underwood.

In the past, when he was in a relationship with Jessica, the cowboys' fans blamed Jessica for Tony's dip in form. The couple, however, ended their relationship sometime after that in July 2009.

Before that, he was also dating Hollywood actress Sophia Bush. On the other hand, there are no records of the past relationship of Candice.