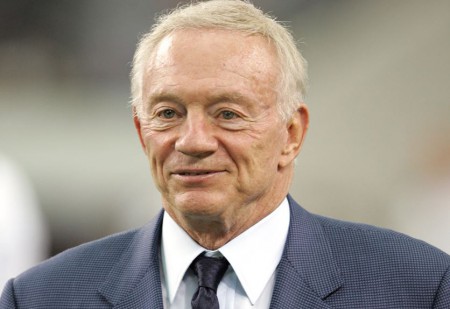 If you follow Dallas Cowboys, an American professional football team of the National Football League, then you might know it's owner, Jerry Jones. The 77-year-old, Jones is an American billionaire businessman who is among a minimal number of NFL owners who had a noteworthy level of success as a football player.

Despite being vilified by fans, Jones is a popular subject in media culture. He has appeared in several films and has appeared in a few commercials as well. Jones has been married to his longtime spouse, Eugenia Jones, since 1963.

The owner of Dallas Cowboys, Jerry Jones, lives happily with his old-time partner, Eugenia Chambers. The couple married each other in 1963. They exchanged their wedding vows in a private ceremony in the presence of close friends and families.

Jones and his spouse have been husband and wife for over five decades. Unlike Jerry, his wife is quite a reserved woman, but she is the former Miss Arkansas and has won few beauty pageants in Arkansas. Eugenia, who was born around 1944, is the daughter of a small-town banker. She, along with her husband, shares three children altogether.

Eugenia served as a member of the AT&T Center for Performing Arts and the Texas Cultural Trust Board. She, along with her daughter and a small council, Eugenia curates overall curates the art at the stadium.

Moreover, she is the major contributor of rhe Dallas Cowboys Art Collection at AT&T Stadium and has volunteered many trust funds for medical students.

How Jerry Jones Met His Wife?

While Jones was studying at the University of Arkansas, he was a football captain, and Eugenia was a fresher. Mrs. Jones heard her friends praising the young and energetic, Jerry, and she couldn't stop herself from going on a date with him.

Her friends set up a meeting, and the couple first met at a blind date. After having a first date, they went to a state fair, and finally, their relationship began to blossom.

Jerry's Children Are The Backbone Of His Business

Jerry and Eugenia have successfully managed to raise three children throughout their fifty-six years of the marital relationship. They have two sons and one daughter, and all three of them work in a higher position in Dallas Cowboys owned by their father.

Stephen Jones, the eldest kid, was born on June 21, 1964. He is the current executive vice president, CEO, and director of player personnel for the Cowboys.

Charlotte Jones Anderson, the only daughter of the Jones couple, was born on July 26, 1966. She is the executive vice president and chief brand officer in the Dallas Cowboys.

The youngest child, Jerry Jones Jr., was born on September 27, 1969, and he works as the chief sales and marketing officer as well as vice president of the Dallas Cowboys.

Jerry was involved in a controversy back in 2014 when a picture was leaked via twitter. The picture showed Jerry getting cozy with two younger females who later identified as strippers.

The scandal nearly jeopardized Jones' marital relationship, but later they reconciled. Also, Jerry explained that the third party misrepresented the picture for extortion.

One of the wealthiest owners in the NFL, Jerry Jones, has an impressive amount of net worth, which is $8.4 billion as of October 2019. He is among the top five wealthiest NFL owners, and it seems with time, his earnings from Dallas Cowboys will increase even more.

Jerry made his fortune entirely from the NFL when he purchased the Cowboys for $140 million back in 1989. The team is currently valued at $5.5 billion. For your information, much of the league's financial success has been credited to Jones himself since 1989.

In 2015, Forbes reported Jones' net worth to be $5 billion, which he made as being the owner of the Cowboys. In an interview with HBO, Jerry revealed that he borrowed a million dollars from a company to open up a string of Shakey's Pizza Parlor restaurants in Missouri.

Dallas Cowboys Is The World's Most Valuable Sports Team

The professional football team, Dallas Cowboys, is worth a staggering $5 billion, and according to Forbes, the Cowboys is the most valuable sports team in the world.

The defending NFC champions generate twice as much sponsorship, and seating revenue at it's AT&T Stadium than any other team.

In second place is the Major League Baseball (MLB)'s New York Yankees, with its value coming in at $4.6 billion. Real Madrid is ranked as the third most valuable soccer team in the world, with its value increasing 4% to $4.2 billion.

The billionaire businessman, Jerry Jones purchased a new 357-foot yacht for $250 million in January 2019. The Dutch superyacht shipyard 'Oceanco created the ship,' and Jones named it Bravo Eugenia, dedicating to his wife of 56 years.

The massive ship offers many special features such as helipads on both foredeck and the aft deck, a large garage, and a room with plenty of space. Also, the yacht has a large spa with a sauna, steam room, massage room, plunge pool, and rain shower.

In 1995, a publication called ‘Financial World’ stated him as the owner of the most valued sports association in specialized sports.

In 1993, Jones got the Outstanding Team ESPY Award as owner/president/GM of the Dallas Cowboys. In 2013, Jones received the Horatio Alger Award, and in 2014, he became the NFL Executive of the Year. Jones was inducted into the Pro Football Hall of Fame in the class of 2017.