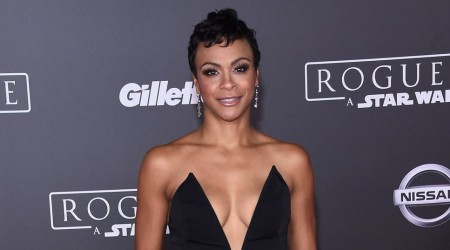 The talented actress, Carly Hughes is an American actress, singer, and fitness expert who is best known for her role as Angela in ABC's "American Housewife." With eight Broadway shows to her name, Hughes has established herself as one of the prominent personality both on and off-screen.

Carly, who was born on 1st of October, hasn't revealed her actual birth year. However, her age might be around mid-thirties. Throughout her career, Hughes has maintained an impressive net worth. Well, she has been working in the entertainment industry for over fourteen years.

The beautiful actress, Carly Hughes might play a lesbian character on American Housewife, but in reality, she is dating a handsome man named, Rory Cook. Their relationship became public when she shared an image of her and Rory in May 2018 on her Instagram.

Over time Carly and Rory have developed a strong bond. The couple attends parties, movie premieres, and screening together. Also, they never miss any chance to show their love for each other on social media.

On May 19, 2018, the first picture of Hughes and Cook surfaced where she wrote a caption: He made me laugh. Before the public knew about her romance, there was a rumor about her sexuality.

Fans, as well as online sources, reported her as a lesbian. But she is a straight woman, and her Instagram stories can be looked as a proof.

There is only a little information about her lover, but he used to work previously for the CBS show The Talk. The pair is not married and might be planning soon for the nuptials.

The American Housewife actress, Carly has an estimated net worth of $1.5 million. Although she hasn't revealed her actual wealth, her earnings are calculated from the work she did. Primary income comes from her acting roles in television shows and movies. Actress, Sami Gayle who also transitioned her career from Broadway to films, has similar earnings.

Working in Broadway shows, Hughes managed to earn additional money. According to Glassdoor, the average salary for a talented actress and performer is around $66,000. Therefore, she has a luxurious lifestyle.

The academically established actress, Carly Hughes is also a fitness enthusiast. She looks stunning in every outfit, and her physique is well-toned.

The 5 feet 6-inch actres and former singer regularly works out and has a comprehensive fitness schedule and modules. Her other hobbies include cooking.

From Broadway To Television

At the beginning of her career, Hughes appeared on small roles such as in elementary school productions Robin Hood. Afterward, she appered in movies ‘Playing Chicken: The Movie’ (2006), ‘City Island’ (2009), and ‘Pineapple’ (2008).

Further, Carly is famous for her Broadway shows such as “Velma Kelly in Chicago,” “The Leading player in Pippin,” “Georgia Brown in the Sky” etc. Some of her notable awards include Grammy and the prestigious Princess Grace Award for Acting and Excellence.

Follow Marriedceleb for more Gossips and Biographies of your favorite star!!!