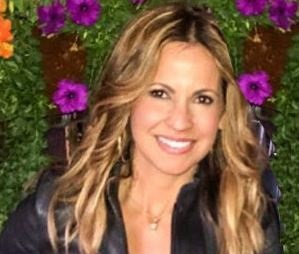 Catherine Mooty is famous these days as the wife of the legendary NFL quarterback Troy Aikman. Apart from his husband's fame, she is also renowned for fashion icon as well as the co-owner of a portable boutique in Dallas, Texas.

Catherine was born in Dallas, Texas, the USA, on 13th October 1970, as Catherine Cecil. She is more popular with her nickname Capa Mooty. She holds American nationality while her ethnicity is white.

Troy Aikman and Catherine both came to limelight after they were seen spending time on public places. Many news has been published regarding the couple's love story; it all began around February of 2016.

Troy even uploaded Catherine and his date night photos in his social sites account. The pair were slowly falling for each other; later on June 2, 2017, the beautiful couple took a trip to Lake Como which is in Italy where Troy was an icebreaker, he romantically proposed Capa.

The pair went for a beautiful boat ride by holding glasses of wine during their outing. NFL star even laid down on his knee and popped up the big question. After the answer was yes, he made an announcement on his Instagram account about the incident where he stated Mooty being the love of his life, and the night is one of the best moments in his life.

After all of this romantic incident and dating, the pair walked down the aisle in Santa Barbara, California. The romantic couple accepted their wedding vows by stating I do at the same place where Kim Kardashian and her former husband, Kris Humphries tied their knot.

Both bridals kept their marriage ceremony very low key from the media. Catherine was looking absolutely gorgeous in her white strapless satin wedding gown while Troy was dashingly suited in a white tuxedo.

The beach wedding occurred on 4th September 2017, where their family and friends were seen as a guest. After their big day, the pair traveled back home to Dallas.

Catherine was previously married to Jerry Mooty, who is a lawyer by profession and is the co-founder of the law firm McCathern and Motty LLP. The successful entrepreneur was tied in a nuptial relationship with Jerry for more than a decade.

The couple was blessed with two sons; however, due to some misunderstanding and marital issues, the pair finally parted their ways in 2013.

After their official divorce, both Jerry and Catherine were granted equal custody of their children by the court. However, the two children are living with the mother and father is still taking care of them.

Troy has been one of the sensational personalities in the history of American football. He used to play as a quarterback for the Dallas Cowboys in the National Football League (NFL). Troy married former Cowboys publicist Rhonda Worthey on April 8, 2000, in Plano, Texas.

They were once named as a lovely couple during their relationship. The couple shares two beautiful children from their marriage. After 11 years of their nuptial relationship, the couple announced their separation on January 24, 2011, which was finalized on April 12, 2011.

After being apart from each other, the pair are still supporting their children in every possible manner.

His older daughter, Jordan Ashley Aikman was born on August 24, 2001, who plays for the high school lacrosse team, and younger daughter Alexa Marie Aikman was born on July 30, 2002, who is currently studying. On the other hand, Catherine shares two sons with his ex-husband, Jerry.

They welcomed their first son Luke Mooty at the end of the 1990s and later welcomed their second son Val Mooty. Currently, the family of six are living together and are seems very happy with each other. The pair's four children also attended their wedding as their guest.

Catherine has an estimated net worth of $1 Million; however it hasn't been officially confirmed yet. She is a very successful entrepreneur who has a good flow of fortune without a doubt.

Being engaged in various fields, she is earning more than $200,000 annually. In addition, she is one of the known fashion icons and has been linked with many brands and endorsements. Currently, the 49 years old entrepreneur and celeb wife is enjoying a life of luxury and taking good care of her family and business.

In 1993, he was the highest-paid player in the NFL, thanks to a 8-year $50 Million contract which included an $11 million signing bonus. At the time of his retirement, his salary was $7.5 Million. Currently, he receives wage around $1 Million per year as a Fox Commentator.

Other Interests and Engagements

He is also a successful investor and former joint owner of the NASCAR Sprint Cup Series racing team Hall of Fame Racing. NFL hero is a minority owner of the San Diego Padre and is also a partner and spokesman for IDLife.

He has made millions when a local restaurant he frequented during his Dallas Cowboy days called Wingstop went public. Currently, he gathers more than $1 Million annually to his account. Furthermore, during his divorce with Rhonda, he paid $2 Million cash settlement.

Troy listed the family's long-time home in Highland Park, Texas for $27.54 Million in 2011 as part of his divorce. It was listed as one of the most expensive homes which was listed for sale in Texas at the time.

Later in 2012, he lowered the price to $14 Million due to not finding sufficient buyers. He then sold that home for $11.5 Million range, which has been officially confirmed yet.

In April 2011, Troy bought the Briggs Freeman Sotheby house at $4.25 Million which starting price was at $6.85 Million and was later lowered to $4.6 Million. Currently, he and his family are residing in Mansion in Dallas.

Dig in to know more about Celebrity Wife at Married Celeb!!!