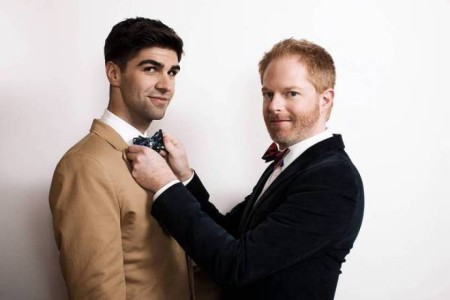 Modern Family star, Jesse Tyler Ferguson and his spouse, Justin Mikita, a lawyer, announced they're expecting their first child on the talk-show. The couple confirmed this good news while featuring in The Late, Late Show with James Corden on 22nd January 2020.

The celebrity duo further said that they're going to welcome their child in the coming month of July 2020. During an interview with James Corden, the 44-years-old actor said he is now getting serious about the things for the future with family planning.

The reason behind the family planning is because Ferguson and Mikita are currently running in the age of an adult man while entering their 40s, and it is essential to have a child in their life.

The five-time Emmy Award nominee, Jesse further said, he and Mikita actually didn't want the news of their upcoming baby to be mentioned. But, the gay couple disclosed that they're expecting a baby anyway.

The married pair haven't revealed the gender of their unborn child, and Ferguson once joked about confirming a human being to the media. The duo also said they are very excited to be the parents and added some things like "Tick Tock," which means they're waiting to welcome a new family member.

What is more to this? Tie The knot Organization founder, Tyler came out to be gay in public after announcing his engagement with Mikita in September 2012. The two first met back in 2010 and eventually started dating.

On 20th July 2013, the gay couple walked down the aisle in a close ceremony held in Manhattan, New York City, New York. Their wedding ceremony was officiated by their mutual friend, Tony Kushner, an American playwright.

After their blissful marriage, the couple decided to grow their family one day. As per People magazine, Ferguson also said he desires to have a child in the upcoming next four or five years shortly tying the knot with Mikita. At that time, Ferguson said that he wanted "at least eight kids in the minimum."

Just like the celebrity couple, Ferguson and Mikita, there are some other celebrities, including Jenna Wolfe and Stephanie Gosk, who are blessed with two adorable kids.

If You're Thriving To Explore More Of Your Favorite Celebrities' Intimate & Professional Life - Visit Married Celeb!!!