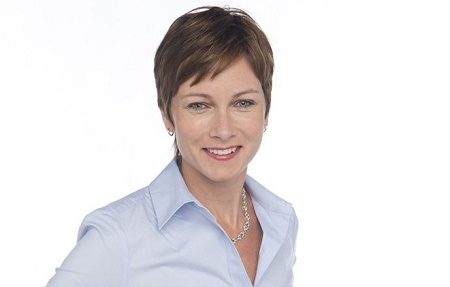 American news correspondent, Stephanie Gosk, is best known for her coverage at NBC News. She is active in journalism since her 20's, and till the date, she worked at many shows with different channels.

Gosk was born on April 17, 1972, in the community of Londonderry, New Hampshire, USA. She is White as per her ethnicity and is American by nationality.

Gosk is an openly lesbian who came out to the public in the year 2013. The same year, she engaged to her longtime girlfriend, Jenna Wolfe, who is the former Weekend Today news anchor.

The couple first met back in 2010 during their work and soon started dating. They, however, choose to keep their love life private and only open after Gosk revealed her sexuality.

As of now, the love birds seem happy with their current relationship status and no hurry to bound in a marital relationship.

Gosk and her partner share two beautiful daughters. They first welcomed their baby girl Harper Estelle Wolfeld-Gosk on August 21, 2013. After two years, they were again blessed with another daughter,Quinn Lily Wolfeld-Gosk, on February 4, 2015.

Their daughters were born via artificial insemination, and the identity of the donor, however, has not revealed yet. Now, the entire family lives joyfully in the United States.

One of her acclaimed work includes her reporting, shooting, and producing the war in Iraq all by herself for Good Morning America and World News Tonight.

The 47 years old reporter has also reported and corresponded for major world events like the assassination of Osama Bin Laden by US special forces. More to that, she is an activist for the LGBTQ community in Russia and the stigma surrounding homosexuality there. Similarly, other news reporters like; Lester Holt, Kristen Welker, Ron Allen also contributed to society.

Stephanie Gosk has a total net worth of around $2 million as of 2019. The primary source of her earning is from her career in the news broadcasting industry for two decades. The average NBC correspondent earns between $96,726 to $121,503, so she might earn the same figure.

Check out the video of Stephanie explaining why she transfer to Georgetown,

Gosk worked on shows like Today, MSNBC, and NBC Nightly News from where she collected an impressive sum of amount. Moreover, she lives in a luxurious house that costs a thousand dollars in New York City along with her family.