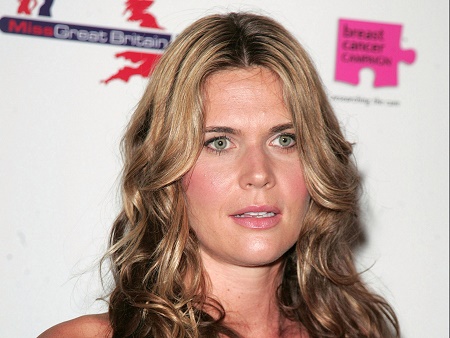 Journalists are one of the key roles in supplying news about politics, climate, and notable events. Today the article is about a 43-year-old journalist and former gossip columnist, Celia Walden.

Walden was born on December 30, 1976, in Paris, France. to Sarah Hunt, and George Walden, a former Conservative MP. She holds British nationality and belongs to Caucasian ethnicity.

At the wedding, the couple kept the guest list of family and friends only. Subsequently, their nuptial party was held at Swinbrook's Swan Inn, owned by Devonshire's dowager duchess.

On the big day, the bride stunned a floor-long empire-line gown and a simple white flowers wreath covering her flowing blonde hair. Whereas the bride wore a navy suit and burgundy tie.

Walden mused about being wife of Piers Morgan, check out the video;

The couple first met through their professional work as both of them shares the same job. After few meetings, they officially started dating in 2006 but kept their romances private because Celia was just broken up with her then-boyfriend, French chef Jean-Christophe Novelli.

Celia, the daughter of former Tory MP George Walden, and the son of Vincent Eamonn O'Meara announced that they were expecting their first child in mid-2011. Finally, on November 25, 2011, the couple welcomed their bundle of happiness, a baby daughter Elise Morgan.

Elise is now 7 years old and enjoying her childhood on the shed of her lovely parents in the United Kingdom.

Daily Mirror editor was previously married to first wife Marion Shalloe in 1991, who is a nurse by profession. In 2007, they called off their marriage of more than fifteen years. It is believed that she had left Morgan for another man, while others said that it was Morgan who had an extramarital affair.

They share three children together named Albert Douglas Morgan(17), Stanley Christopher Morgan(13), Spencer William Morgan(10). Even after the divorce, the former couple still close to one another and is on good terms as well. The kids might be the reason behind their continued friendship.

Well, Marion is one that takes care of their kids. Piers, however, shares a special bond with his family. He manages to see his kids from his busy schedule. Yet Marion and Piers can't expect anything more.

Celia Walden earns decent money from her long-time career as journalist and book author. To date, she has served for many network stations and has written for popular magazines like The Spectator, GQ and Glamour magazine. Considering her career graph, her net worth must lie between $800 thousand-$1 million.

Walden also worked for the Daily Mail and served as the last editor in The Daily Telegraph to look after the Spy section. Furthermore, Celia also published a book, "Harm's Path," in 2008. Similarly, British TV anchors Norman Smith and Huw Edwards also earning a hefty sum from their journalism career.

To read more about journalists on marriedceleb!!!