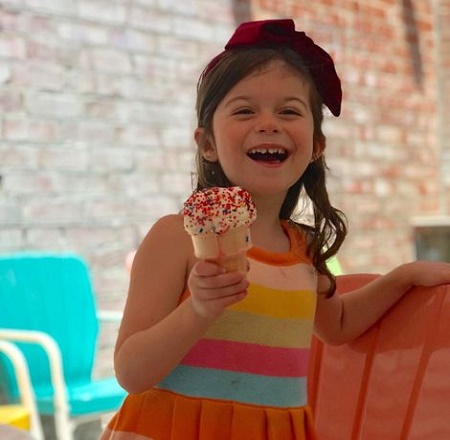 Being a child of a renowned celebrity makes it easy for anyone to receive media and people's attention. Today's article about Charlie Mae Annable who stole limelight after her birth like Azurie Elizabeth Irving and Luca Cruz Comrie. Well, she is widely recognized as the single daughter of a famous Hollywood actress, Odette Annable, and her actor husband, Dave Annable.

The celebrity kid, Charlie Mae Annable, was born on 7th September 2015 on Labor Day. As of now, Charlie Mae is 4 years old. Regarding her citizenship, she is American and is of mixed ethnicity.

As we already mentioned above, Charlie is just a 4-year-old kid, and she is too young to marry or date her boyfriend. For now, she still needs her father and mother's love, comfort, guidance, and care.

Nevertheless, Mae Annable shares a good and healthy bonding with her parents. Currently, she is enjoying her childhood happily in the United States.

Now, talking about her parent's marital life, actress aged 34 and actor aged 40 tied the wedding knot on the 10th of October 2010. The glamorous wedding event took place in Ojai, a picturesque city just north of Los Angeles, at an al fresco ceremony on Sunday.

On the big day, the bride Odette donned a strapless Monique Lhuillier gown while the groom stunned wore a blue tuxedo. Moreover, 215 guests, including family members and friends, were attended on their functions, including the costars of Annable's Brothers and Sisters. The star even claimed that he is the luckiest man ever with Us magazine.

"I feel like the luckiest man ever," "I married my best friend and I could not be happier."

After five years of their nuptial life, the couple welcomed their first baby, i.e. Charlie Mae Annable, in the year 2015.  As of now, the whole family is living a happy and healthy life in the united states.

Now, talking about their first meeting, when husband and wife played their role together on Brothers and Sisters in 2005, they met each other. Immediately after, they hit it off and soon started dating.

Parents' (Dave and Odette) Net Worth

Born to wealthy parents, Charlie Mae is now living a very rich lifestyle under the parent's surveillance in the United States. Speaking of now, she is very young to start her career, but if she follows the footsteps of her parents, there is a chance to make an appreciable amount in the near future.

Mae Annable's mother, Odette Annable, has the whopping net worth of $4 million as of 2019. Of course, she made this bulky amount through a thriving professional career as an actress. The star likewise is best known for many roles in movies and TV shows such as playing a role as Beth McIntyre in the monster film Cloverfield, Aubrey Diaz in the ABC drama series October Road, and Dr. Jessica Adams in the Fox medical drama series House.

On the other hand, Charlie Mae's father, Dave Annable, is also a prominent figure in the media industry. Well, he is an American actor who is known for starring the role of Justin Walker on the ABC television drama Brothers & Sisters, Pierce Harrison on the NBC medical drama Heartbeat and Henry Martin on the ABC supernatural drama 666 Park Avenue. As of now,  Dave has a  net worth of $1.5 Million as of 2019.