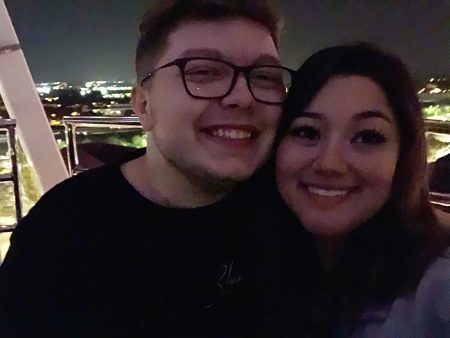 Ghost Aydan has no passion for playing small games while settling down just for fortune in life, there is an excellent dream in his mind that begins with a burden of confidence and energy. So, this phrase is about Aydan's curiosity of becoming not just a beginner, but a professional in gaming, for example, Fortnite.

Born as Aydan Conrad, the Fortnite streamer is also competing for his strength in big tournaments and competition when it comes to gaming. So, what's going in Aydan's personal life, is he dating or single in 2020? Let's explore more in details in the following.

20-year-old streamer, Aydan is romantically linked into a relationship with Fortnite content creator, Danielle Sweets. The couple had their first encounter at the PAX-East, a gaming event in 2018.

In June 2018, the duo later became friends and started talking for late-late nights. After spending a joyful time online, they eventually decided to interact face-to-face, and after they meet, they fell in love and began to cherish their love life.

Appreciates Each Other's Passion for Gaming

Fortnite player, Aydan and Danielle knew their ability and passion for gaming. The beautiful couple even shows their respect and compassion towards their gaming with full of affection.

On 12th April 2019, Danielle tweeted on Twitter, where she said, "Just wanna say I love and appreciate him [Aydan] so much." She further wrote that he has changed her life in many positive ways, and she will never stop being grateful for him. She also told Aydan's humor and happiness to make her life so much more enjoyable.

The Dating Streamers Loves to Participate in Big Gaming Events

The love birds, Aydan and Danielle are fond of participating in big events, where a lot of professional and competitive players participate. Back on 18th June 2018, Danielle shared a picture of her and Aydan meeting a famous eSports commentator, MonsterDface, and his girlfriend, Alexandria, during an event.

In Danielle's Twitter post, she expressed her feeling after meeting the two legendary players and said they are so sweet. Danielle then said she and Aydan are so curious to meet the promising gamers in the next event.

What's more to this? Aydan also tweeted on Twitter, where he wrote, "30 Kill Duo With The Girlfriend," and tagged Danielle on 8th February 2019. Likewise, some other popular gamers, including Neil Arce and his girlfriend, Angel Locsin have a similar passion for winning games.

Check Out More Diversifying Articles Of Your Favorite Celebrities At Married Celeb!!!