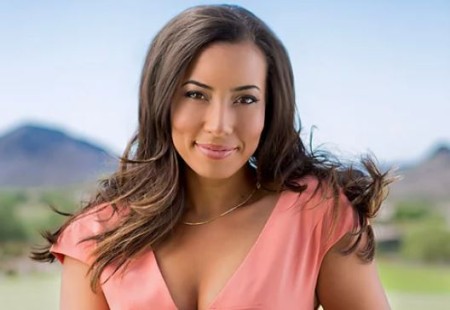 The 2014 Volvik RACV Ladies Masters' winner, Cheyenne Woods is an American professional golfer. Woods is one of the sixth African-American to play on the LPGA Tour. Further, she is the winner of the 2012 SunCoast Ladies Series LPGA International.

Cheyenne who played for the Xavier College Preparatory golf team has won over 30 amateur tournaments. She won back-to-back Arizona 5A State Championships in 2006 and 2007. Further, Cheyenne is Tiger Woods' niece. Now, let's know about her personal and professional life besides her net worth.

As per rumors, Woods is in a relationship with MLB player, Aaron Hicks. Hicks who plays for the New York Yankees shares two sons with his ex-girlfriend, Jessica Knoles. They separated in mid-2020.

There has been official confirmation from neither Cheyenne nor Aaron. Maybe they are just good friends. As of now, Woods is not married. Therefore, the media might have exaggerated Woods and Hicks' relationship.

Meanwhile, some sources also claim Cheyenne has been dating former NFL player, Brandon Magee since 2013. The claims might be false but they were spotted together in community events back in 2017. Likewise, Woods never confirmed having an affair with Magee.

At 30, Cheyenne is probably single. As mentioned she is yet to be a married woman. The details about her past relationships are ambiguous. Further, Woods prefers not sharing her personal life out in public and media.

The former Symetra Tour player, Cheyenne Woods has an estimated net worth of $300,000 as of 2021. Further, her career earnings of $321,619 is lesser than Australian golfer, Minjee Lee whose career earnings worth over $6 million. However, in the 2014 Volvik RACV Ladies Masters tournament, Cheyenne was the winner, while Lee was the Runner-Up.

After graduating from Wake Forest University in 2012, Cheyenne started her professional golf career. She debuted as a pro at the 2012 LPGA Championship after qualifying for the 2012 U.S. Women’s Open by finishing as co-medalist.

Woods has endorsements deal with Nike, but the contract isn't disclosed. Further, she co-hosts a podcast called, Birdies Not BS with Doug Smith, where they talk about a modern approach to the game of golf. Talking about her uncle Tiger Woods, his net worth is $800 million as per celebrity net worth.

Cheyenne Nicole Woods was born on July 25, 1990, in Phoenix, Arizona, the United States. She was born to parents, Earl Dennison Woods Jr. (father) and Susan Woods (mother). Cheyenne belongs to a mixed heritage. Her father is an African-American, while her mother is of white ethnicity.

Woods' paternal grandfather, Earl Sr. was her first coach who motivated her to pursue a career in golf. Meanwhile, Cheyenne looks up to her uncle Tiger Woods and idolizes him.