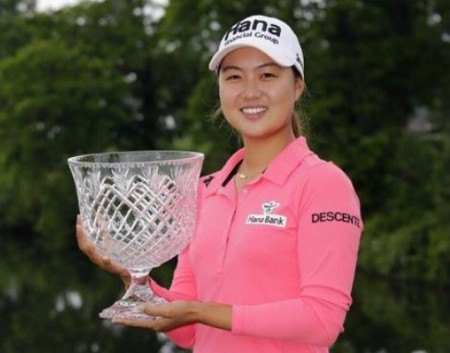 Minjee Lee is a rising Australian professional golfer who was ranked number one amateur golfer in 2014. Recently, she was ranked third in the Women's British Open tournament in 2020. Minjee is often called as the Invisible Champion of Australia because of her low-profile in her home country.

Minjee began her career by age 10, practicing ten hours a day. She won the 2012 U.S. Girls' Junior and the 2013 Australian Women's Amateur. Her younger brother, Min Woo Lee, also plays golf. Let's get to know the star player and her personal details.

At 24, Minjee is currently single, and she is much focused on her professional career. She is mostly keen on developing her skills and winning as many tournaments as possible. Hence, the adorable golfer prefers not to spend time in romantic relationships. Unlike Lee, Mckenzie O'connell is a happily married golf player.

Minjee is a fun-loving and outgoing personality. When she is off the court, Lee travels to different exotic places with her family and friends. Further, she takes her parents to watch her game as well. Lee is fond of watching Korean drama series.

As of September 2020, Minjee Lee has earned a total of $6,740,308 as her career earnings. Her net worth is at least $5 million. She has won five LPGA, one Ladies European, and two ALPG tours. Also, Lee positioned in third place at the 2020 Women's British Open.

The Australian native is among the wealthiest young golfers. However, she sponsors South Korean companies, as Lee doesn't have any Australian sponsors. Hana, a reputed Korean bank, currently sponsors Lee.

Minjee has accomplished a lot at a young age. In 2018, she became the first woman to win the Greg Norman Medal. She was named the best Australian professional golfer on the world stage. Another golf player, Paige Spiranac, also has a decent net worth.

Minjee saw her career-best earnings and scoring rank in 2018. She finished second in the money list and scoring average with total earnings of $1,551,032. Let's break down her wealth.

Lee’s mother was a teaching professional at the driving range in Winthrop, in Perth’s southern suburbs. Meanwhile, her father was a single-figure player, too. Minjee's younger brother, Min Woo Lee, has also taken golf as his path. He won the 2016 U.S. Junior Amateur. The Lee siblings are the first to win the USGA's junior championships.