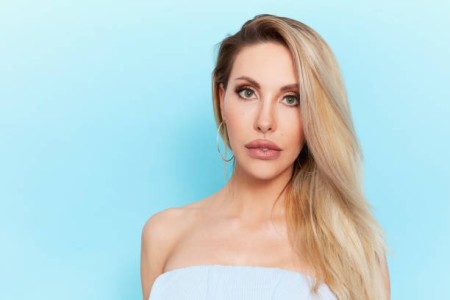 American singer, Chloe Rose Lattanzi came to attention after the release of her debut single, Wings and a Gun. She is also well known for her role as Izzy Wilde in the made-for drama movie, The Wilde Girls, for which she received recognition for Young Artist Award.

Lattanzi was born at 5:17AM at Cedars-Sinai Hospital, Los Angeles, California on 17th January 1986. She is the daughter of Dame Olivia Newton-John (mother), a singer and Matt Lattanzi (father), a actor. Let's take a glimpse of Lattanzi's personal life.

The 33-year-old singer, Lattanzi is romantically involved in a relationship with a Jiu-Jitsu artist, James Driskill. The duo got engaged in 2011 after dating for a few months.

Following their engagement ceremony, the couple moved to Oregon state of the United States to pursue a marijuana business in 2017. Two years later, James posted a picture of Lattanzi in a bikini on Instagram and captioned,

I am a lucky guy. That's my Bahama Mama I Love You

Driskill's Instagram post was such a surprise for their fans because the duo hinted that they were expecting a 3rdmember of their family in August 2017. Chloe recently shares a picture of her in a little beige dress on 3rd January 2020 via Instagram, where she seems to be more chubby than before, which could be the sign of pregnancy.

Currently, the soulmates are running their marijuana business in their cannabis farm in Oregon. More to that, their farmhouse was built in December 2016.

Chloe's guardian, Olivia Newton-John and Matt Lattanzi experienced the most cherishable moments while they were in their married life. The two united as husband and wife on 15th December 1994.

The couple had their first meeting on the set of Xanadu in 1980, where they worked as colleagues. They shortly began dating and got engaged after living in a longtime relationship for four years.

The couple, however, didn't last long due to their different spiritual interests and dissolution in understanding and filed for divorce in 1995. By the end of 1995, the duo confirmed their separation with a divorce agreement.

The Wilde Girls actress, Chloe started taking several plastic surgeries for her nose to bust augmentation, including Botox and filler, when she was just 18 years old in 2004. After undergoing various chemical operations, she noticed her skins are physically distress after a painful breast surgical procedure.

During her initial plastic surgery, Chloe removed multiple fillers from her face and lips implants in Australia. She revealed that she successfully battled anorexia after she gets a treatment for alcohol and cocaine addiction on 27th August 2013.

Recently, she proclaimed that she is now feeling happy after a glance of surgery of breast implantation and her husband loves it too. After her last plastic surgery, she is comfortable with her 32DD cup bosoms size.

What is Chloe Rose Lattanzi's Net Worth?

Chloe Rose Lattanzi's net value is $1 Million as of 2020, which is similar to Macy Kate's wealth. She reportedly earns a fruitful income from record sales. In the United States, a singer makes an average payroll of $44,359 annually, which might be similar to Lattanzi's yearly salary.

Aside from all this, Chloe is fond of loving her two pet dogs, which are Russkiy Toy and Havanese dog breed. She also shared a picture of her pet dogs on Instagram on 15th December 2019.

If You're Interested To Read More Biographies & Articles Of Your Favorite Celebrities - Visit Married Celeb!!!