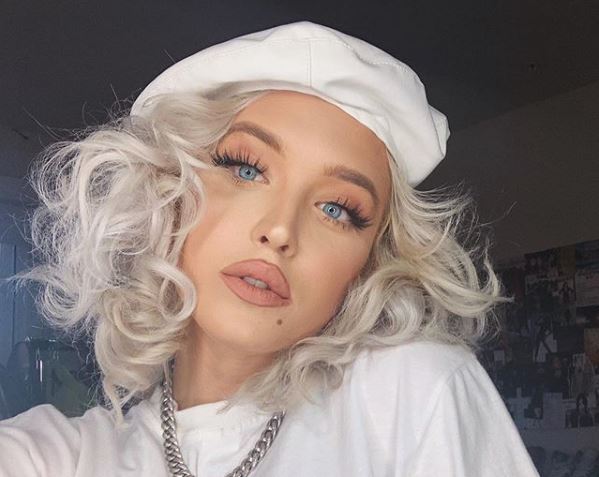 This next personality on our list is Macy Kate. She is a singer, vlogger, and one of the known YouTube personalities. Kate has recently released her new official music video, Cry for help through her channel in the YouTube Macy Kate, which was produced by Antonio Flores.

Kate is currently 21-years-old, and already, she is one of the most talked celebrities in the world. Her beautiful voice, music sense, and incredible body lead her to gain a massive fan following within a short period. Macy was born on January 19, 1998, in St. Petersburg, Florida. According to her birth date, her birth sign is Capricorn.

Does Macy Kate have a boyfriend? Her Current Relationship

Scrolling through her social media, we know that she is currently single. The singer hasn't revealed anything about her relationship. She talked about her past boyfriend on her YouTube channel but currently, she is not focused on her love life.

Maybe the 21-years-old singer is focusing on her career rather than her love life. All of her fans, however, are still wondering who is she dating?

Being a singer, she is mostly busy in her recordings, so it's hard to manage time for her love life. But in the past, she was in a relationship with a guy. So, who is he? Let's try to know more.

Past Affair and Marriage life, Is Macy Kate married?

It is a known fact that Kate is not a married girl. Many of her fans, however, believe she has a secret boyfriend. The beautiful social media personality was in a relationship with her long-time mysterious boyfriend.

On her YouTube channel, she talked about her past affair and mystery boyfriend. Macy updated her fans on her personal life via her YouTube on July 24, 2017. Despite all the reveal, she still hasn't revealed the identity of her past love.

The reason for the break-up with her partner is a, but we could see her going through a hard time. All of her fans are still wondering who the guy is? But she hasn't revealed his name and photo anywhere.

The net worth of Macy Kate, How wealthy is she?

Macy has estimated net worth of $1 Million other singers like Sarah Grace and Calum Scott has a net worth of $500,000 and $2 Million, respectively. All of her net worth is earned through her hard work and dedication towards her work.

Fortune from the Social Media

Kate is taking social media by storm for a long time now. Her massive turning point in life came in after she covered the Imagine Dragons song Radioactive. In the cover song, she featured alongside artists like Kurt Hugo Schneider and her bandmates.

That video helps her to gain a massive fan following and is watched 35,191,990 times on YouTube as of now. The estimated earning from that video is more than $65,105 as per social blade.

Due to the massive fan following in her channel, her video gets more than a Million within a short period. Sometimes it goes beyond the seven Million views which contribute to her revenue.

The Singer-songwriter Kate has to grind herself into who she is now. At the age of ten, she started practicing classical piano for almost five years. By thirteen, she starts to play with girl-band, A Dream Come True.

Her early dedication towards music leads her to record many songs throughout her career. Apart from being a musician, she participated in the Olympics in competitive swimming. Despite being good at swimming, her destiny to become a singer leads her to a different career path.

Her participation in the reality shows Rising Star can be marked as the turning point in her career. At the show, she released her singles titled You Gave Me Love and First Kiss. She has also supported many top artists which includes Rick Springfield, Austin Mahone, OMG, and Alex G.

Dig in for more gossips and biography at Married Celeb.