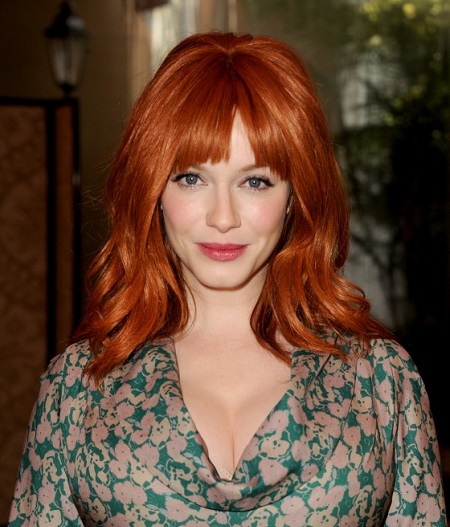 Christina Hendricks is a six-time Primetime Emmy Award nominee American actress and former model. However, she gained popularity after portraying the character of Joan Holloway on the AMC series Mad Men from 2007 to 2015. More to that, she is known for her recurring roles in Beggars and Choosers (2001–2002) and Kevin Hill (2004–2005). Currently, she stars on Tin Star (2017–present) and Good Girls (2018–present).

Christina Rene Hendricks was born on born on May 3, 1975, in Knoxville, Tennessee, United States. She is the youngest child of Robert Hendricks, a Forest Service employee and Jackie Sue Hendricks, a psychologist. Further, she has one older brother Aaron Hendricks. She has dual British and American citizenship and is of white ethnicity.

Had Divorced From Geoffrey Arend in 2019

Yes, it is very true. Actress Christina, whose height is1.71 tall, has recently announced her separation with an ex-spouse, Geoffrey Arend, after being married for 10 years in 2019. He is an American film, TV  theater, voice, and actor.

On Thursday, October 18, 2019, the TV star took her Instagram page to share the news of her divorce from Arend in a joint statement. Her text read: "Twelve years ago we fell in love and became partners. We joined our two amazing families, had countless laughs, made wonderful friends, and were blessed with incredible opportunities,".

"Today we take our next step together, but on separate paths," she continues saying. "We will always be grateful for the love we’ve shared and will always work together to raise our two beautiful dogs." But she restricted the option to comment on the post to her fans.

According to the sources, the couple who were introduced through Mad Men co-star Vincent Kartheiser has filed an agreement with the court on December 16. Where, they listed their separation on April 19, 2019. And the two have already settled their divorce in September 2019.

Christina, aged, 45, and Geoffrey, aged, 42, tied the wedding knot on Oct. 11, 2009. Their wedding function took place in New York in the presence of family members and friends. Together, the divorced duo does not share any children.

What is Christina Hendricks' Net Worth?

Christina Hendricks who made her TV debut by MTV anthology series Undressed in 1999 has successfully established herself as well known star in the film industry. As of early 2020, she has an impressive net worth of $10 Million. She owes her fortune to a prosperous career as an actress.

As per her salary, Hendricks has reportedly paid off $100,000 per episode at the peak of her hit show, Mad Men. Her other guest starring and supporting roles include Angel, ER, Firefly, Tru Calling, and Without a Trace. In addition, she voiced in 2019's computer-animated comedy film Toy Story 4 as Gabby Gabby. And the movie has grossed over $1.073 billion worldwide, making the eighth highest-grossing film of 2019.

Apart from that, she and her ex-spouse Geoffrey sold their New York City residence for $1.2 million following their spilt. Then, Christina purchased a new house in Los Angeles for $1.2 million in June 2020. Further, she stills has the duo's longtime which was bought in for $1.7 million in 2017.

Not only acting she has worked as a model for over a decade before starting her acting career. In her early twenties, she has done modeling in New York, London, and Japan. She has appeared on the cover of Seventeen magazine and also commercials for Dr. Pepper and Carl's Jr.

Similarly, Hendricks starred in the poster for the film American Beauty as a hand model. Also, she has seen in the music video for Everclear's One Hit Wonder in 1997.