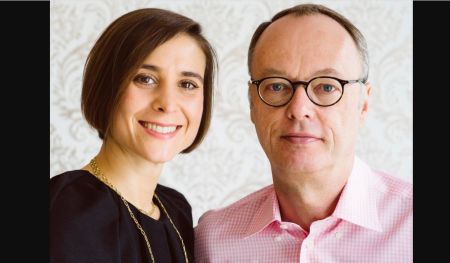 Christopher Kimball grabbed the golden ring in a chain of marriage, whose starting is a glance of happiness, and the ending is eternity. He and his wife, Melissa Baldino are feeling the blossom after finding that their true love stands by their side, whether it is good or bad days.

New York-based chef, Christopher and Melissa are working together in the half-hour long cooking show, America's Test Kitchen. What's going in the marital life of Kimball and Melissa? Let's take a sneak peek of Kimball's personal life below.

First Meeting of Christopher & Melissa through a Job Interview...

The 68-year-old chef, Christopher met his beloved wife, Melissa Lee Baldino in September 2002, when she came for a job interview for the position of his personal assistant. During that time, he didn't hire her because another woman was already there.

More to that, Kimball called Baldino to offer her the job of his assistant when the women quit two months later. Melissa then accepted the position and started working as his assistant for several years. After the time passes, Christopher promoted her as the producer of radio and TV shows in 2006.

The duo became good friends after working together for an extended period of time. They also admire each other's business tactics, working spirit, and loyalty in entrepreneurship.

During an interview with Kimball, he said that "Baldino is a risk-taker, who left a successful career in advertising and became his assistant in the food industry." The duo got engaged after Christopher proposed her for marriage, and she accepted his proposal blissfully.

United as Husband & Wife in a Memorial Church

Christopher and the daughter of Rike Fossl Baldino and Jim J. Baldino of Portland, Melissa tied the knot on 29th June 2013 in a Memorial Church in Cambridge, Massachusetts. During their nuptial, M.I.T.'s chaplain, Robert M. Randolph performed their ceremony.

Following their grand ceremony, the pair announced that they were expecting their first child in 2016. Later, Melissa gave birth to their child, a baby boy, Oliver Kimball on 4th May 2017, who is now two years old.

The marital partners, Kimball and Baldino are avid travelers who love to go to exotic places and to make new friends. Back in 2019, they wished each other to complete the 6th marriage anniversary on the 29th of June.

Do You Know Kimball is Married Thricely?

The Cook's Bible author, Christopher was initially committed to a marital union with his first wife, whose identity is still hidden from the media. The couple, however, separated after filing for divorce due to some personal differences.

Christopher then married his second wife, Adrienne Kimball in an intimate ceremony in 1987. During their reception, they invited their close relatives, family as well as mutual friends.

After living happily for two and a half decades, they eventually ended their marriage after Christopher find Melissa, who sees the potential in him and loves him so much in 2012. The duo divorced in December 2012, taking the child custody of their four kids, Caroline, Charles, Whitney, and Emily Kimball.

Just like Christopher's failure in marriage, some other celebrities, including BlakeWilson, aka Batdad, and his wife, Jen Wilson also divorced. Blake is currently taking care of their four children.

Check Out The Most Amusing Things About Celebrities' Intimate Life As Well As Career Highlights At Married Celeb!!!