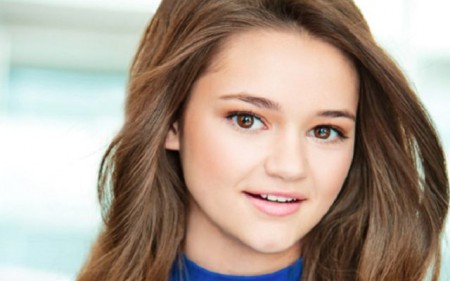 Who is Ciara Bravo?

If you have watched American television series 'Big Time Rush' then you probably have heard about the celebrity that portrayed the role of Katie Knight. Yes! we are talking about Ciara Bravo, who also appeared in Red Band Society as Emma Chota. Besides, this 22 years old actress also works as a voice actress in Open Season 3, Patty in Happiness, and Saraha in Special Agent Oso.

Furthermore, this multitalented actress was born on March 18, 1997, in Alexendria, Kentucky, America. As of 2019, Ciara is 22 years old in age. She officially started her career at the age of 10, after attending the Mike Beaty Model and the Talent Expo in Dallas, Texas.

Apart from that, this 5 feet 4 inches tall actress is not only engaged in any profession. Unfortunately, we currently don't have any information regarding her educational background.

Later, she got a bigger opportunity in 2009. She was offered a role in two short films Lost Sheep and Washed Up. Her single audition tape proved enough to earn a 3-year contract with Nickelodeon. The short movies was proved to be a breakthrough point for Ciara.

Bravo is also a voice actress; she has provided the voice of Giselita in the Open Season franchise. She has also done voice work in Happiness Is a Warm Blanket, Charlie Brown, Special Agent Oso, and The Penguins of Madagascar.

Besides, talking about her television debut, her first TV show was Can You Teach My Alligator Manner?, released in 2010.

The beautiful actress, Ciara has robbed the heart of many individuals, some of them are the high-profile personalities too. Let's have glance over her private love life.

Is She Currently Dating Anyone?

Ciara Bravo is possibly single at the moment. But, Ciara was in a romantic relationship with an American actor, Jack Griffo. Some sources claim that the couple dated for nearly 1 and a half year and later got separated.

Meanwhile, Jack was also rumored of being in a relationship with his co-cast, Kira Kosarin. So, that might be the reason for their departure.

Know More About the relationship Between Jack and Kira

On the summer of 2014, Jack Griffo and his co-star Kira were rumored for being romantically involved in a relationship. The duo were often seen out on the public. Later, their fans became more confident when they saw a picture of Jake and Kira in a wedding grown.

However, the rumor was later turned out to be fake when both the actors, Jake and Kira confirmed in an interview that they were just friends and the picture was taken just for fun. Jake also stated, it would be hilarious if we were in a relationship.

Ciara Bravo has a stunning net worth of almost $2 million. Besides, she summons all of her earnings from her career as an actress and voice actress. Likewise, she has an estimated annual income of nearly $200,000.