Comedian Hasan Minhaj Becomes a Father! Welcomes Baby Boy Together with his Wife 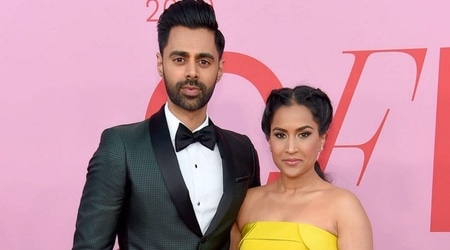 Comic Hasan Minhaj announced on March 19, 2020, that his wife Beena Patel, was giving birth to their second child, a son. The duo announced the arrival of their newborn baby via an Instagram post.

“Even in these crazy times there are so many beautiful moments. Welcome to the world little guy. The Minhaj family grows, and according to Beena it’s done growing. But ya never know, shooters shoot. @amirbangs”.

The host of the famous comedy show, The Patriot Act married his wife, Beena in January 2015. The pair also have a daughter, born on April 22, 2018. Like their first child, Minhaj and Patel have opted to keep the name of their son a secret from the public.

Many of his celebrity friends like Awkwafina, Priyanka Chopra, Tan France, and many more congratulated the couple. They shared their happiness via their Instagram upon the birth of Hasan's second child.

Minhaj, moreover, addressed the ongoing global crisis of Coronavirus which has infected celebrities like Debi Mazar and Andy Cohen. He also explained, how the birth of his son came as a happy moment in these troubling times. The reason for not naming his children in public is the comedian wants to respect the privacy of the people he loves.

Beena Patel is a healthcare worker and is a Doctor of Public Health. Additionally, she also has a bachelor’s degree in Neurology, Physiology, and Behavior. After earning a Bachelor’s degree in 2007, she got a Master’s in Public health from the University of California Davis in 2008.

Patel has used her healthcare expertise to help the underprivileged. She is, furthermore, famous for helping homeless patients in New York City, where she lives with her husband, and other places.

Additionally, she has also worked for various organizations like Retinal Consultants, Lucentis, and Avastin among others. As of 2020, she is working as a transformation consultant at MedAmerica, a position that she first got in June 2017.

Interestingly, the healthcare consultant is fluent in 4 languages, English, Hindu, Spanish, and Gujarati. Both Patel and Minhaj have Indian heritage, Minhaj was born in Aligarh in Uttar Pradesh, India. Similarly, Patel’s family also has Indian heritage and she was raised as a Hindu.

Surprise! Orlando Bloom and Fiance Katy Perry are Expecting their First Child Together