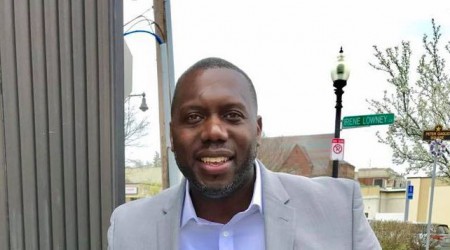 Apart from being famous as the husband of Ayanna Pressley, Conan Harris is influencing the youths in the society in a positive way. He worked as program coordinator, street worker manager for family awareness/ youth opportunity, and The Boston Foundation. As of now, he is the consultant of his firm.

The American national belongs to the African-American ethnic group. Harris grew up in a single-mother household while he graduated with a Bachelor's degree from Boston University in Sociology. Conan had a rough childhood and was arrested for the first time when he was in the seventh grade. Do you know he went on to serve ten years in prison on drug trafficking charges?

The former Boston City Hall associate, Conan Harris, is a married man. He is married to Ayanna Pressley, who is the U.S. Representative for Massachusetts 7th congressional district. She is a famous political figure, just like Kamala Harris, who is the United States' senator and is married to a renowned personality Douglas Emhoff.

Conan and Ayanna married on May 25, 2014, in a ceremony at the African Meeting House on Beacon Hill. Further, the couple went to Martha's Vineyard for their honeymoon. Well, the guest list included many of the Councillor's colleagues in government.

Conan has a daughter named Cora Harris from his previous relationship, but with Ayanna, he doesn't share any child. The family of three currently resides in the Ashmont/Adams neighborhood of Dorchester.

Conan Harris is a political consultant and former Boston City Hall employee. In January 2019, Harris launched his consulting firm Conan Harris & Associates, and is currently serving as its principal consultant. Besides, he worked as the executive director of My Brother's Keeper (Boston).

In February 2019, Conan left his post as a public safety adviser to Mayor Martin J. Walsh. From his job, Conan had a $92,500-a-year salary. Meanwhile, his wife, Pressley, just recently was appointed as the U.S Representative. Also, she was the first black woman elected to the Boston City Council.

Who is Conan Harris?

Conan Harris is the owner of Conan Harris & Associates, who resigned from his position as a senior public safety adviser at Boston City Hall. The consultant has not revealed many details about his childhood and personal life.

Harris is a sought after consultant and motivational speaker on violence Prevention and intervention strategies and youth development programming. Harris, a native of the Dudley Triangle in Dorchester, might be in his early fifties.

He went on to serve ten years in prison on drug trafficking charges. So, what was the cause for his ignorant behavior back then? Well, Conan revealed that he grew up in a violent neighborhood which made him and his friends reckless. But, when Conan got out he felt a sense of responsibility and decided to turn his life around.

At the beginning of his career, Conan  Since January 2019, Conan has been serving as the principal consultant at his firm, Conan Harris & Associates. His career trajectory is somewhat similar to a former assistant secretary, James Rubin.

Stick on Married Celeb for more details on Celebrity husbands!!!