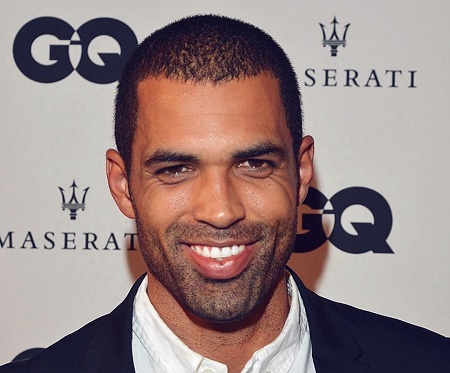 An American actor and producer, Cottrell Guidry came to prominence after playing the small role in American police procedural crime drama, Criminal Minds (2005). In addition, he has performed in television series like The Wankers, American Soul, and Grimshaw.

Guidry was born on 4 June 1985, in Long Beach, California in the United States. Further, he grew up with his elder brother Brett. He holds an American citizenship and belongs to the Afro-American ethnicity background.

Who is Cottrell Guidry Married to?

The 6 feet 1 inch tall TV star is happily married to his wife, Kimberly, whom he shares a great connection. Likewise, the two have been together since 2017.

After one year of love romance, Cottrell and his girlfriend became engaged in the year 2018. Following the year, the lovebirds exchanged the wedding vows on July 29, 2018, at a private function. Since the day, the couple still maintains their romantic relationship in the perfect way.

Scrolling the duo's Instagram account, the married couple frequently posts adorable pictures of their celebrations, adventures, together. On May 2020, 2019 Guidry, the proud husband, wished his wife, Kimberly on her birthday with a beautiful caption.

Happy birthday to my amazing wife. My life changed the moment I met you so I must celebrate the day you were born. You are smart, beautiful, kind, loving and you inspire me and many others. Enjoy this day, my beauty. You deserve it.

Thus, currently, the beautiful duo is in a lovely marital bond with no sign of divorce.

On Oct 29, 2012, Cottrell and his girlfriend, Kat Graham's engagement rumors came out when he hinted in a Facebook post that he may have popped the question. At the same time, he shared a picture on Twitter when getting ready to walk the dog with the hashtag "# WaitingforWifey".

Later in October 2014, the star of the Vampire Diaries also confirmed their engagement. Around a year back, Kat also said on the media that their wedding planning was wonderfully going along. "Basically, it's done now," she said.

Similarly, the 30 yeard old Graham also said the nuptials would take place "fairly soon" at a Grammys after-party. Unfortunately, after being together for six years, Cottrell and his two-year fiance Kat spilt in 2014.

What is Cottrell Guidry's Net Worth?

Guidry who made his first acting debut throughout the film See You on the Other Side, has accumulated a decent amount of money from his acting career. As of 2020, he has an estimated net worth of $1 Million as filmmaker and actor.

Cottrell earns a $50,110 annual salary as an actor. Moreover, he's also making a good income from his modeling job. He worked as a model in the early 2000s, after being approached by several modeling agencies including Kohl. Similarly, from 2009, he has managed by "Next Model Management."

Similarly, he formed the  Los Angeles based company named Stay Cool Production. It committed to putting artists together to support moveable projects. On the other hand, his ex-fiance, Kat enjoys $3 Million net worth throughout her career as an actress, model, rapper, and dancer.