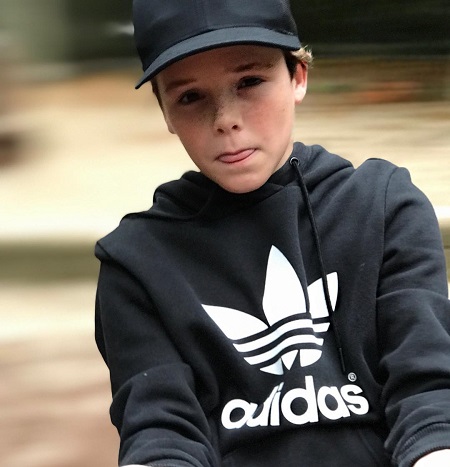 Britsh Celebrity Kid, Cruz Beckham was born with a silver spoon on his mouth. Well, he is known as the youngest son or third born child of soccer star David Beckham and former pop artist Victoria Beckham. His dad, David is a retired, professional footballer who gained 19 major trophies in his two decades of a football career. While his mom, Victoria is known as a member of the girl group the Spice Girls.

Cruz David Beckham was born on February 20, 2005, in Madrid, Spain. His birth was at Neurología Clínica Aplicada SLP Servicio de Neurología Hospital. Further, he is the grandchild of Sandra Georgina West, Jackie Adams, David Edward Alan Beckham, and Anthony Adams. He holds Britsh citizenship and is of white ethnicity. For his education, he attended the Wetherby Preparatory School.

Romeo James Beckham is his next elder brother who was born on September 1st, 2002. He studied at Wetherby Preparatory School. And his little sister is Harper Seven Beckham who was born on 10 July 2011. Now, she is studying at the Italia Conti Academy of Theatre Arts Ltd.

Now, all of them are living under the same roof along with their parents in Holland Park, London. But Brooklyn has recently moved to New York with his girlfriend turned finance Nicola Peltz, 25. They are engaged in July 2020.

The Intimate Ceremony Of Parents

Cruz David has not been speculated to have a girlfriend until now. So, he is probably too young to enter the dating game. Rather than dating games, he is interested in singing and games who also plays for Arsenal Academy.

Now, talking about his parent's marital life, soccer player, David, 45, and singer, Victoria, 46, is happily married for two decades. The lovebirds tied the wedding knot on 4 July 1999. The ceremony took place at Luttrellstown Castle in Ireland, Ireland. Their son Brooklyn who was nearly four months old served as the ring bearer during the event. Similarly, the groom Beckham's teammate, Gary Neville served as the best man.

On their big day over two decades ago, the bride first wore the satin ballgown by Vera Wand while the groom dressed a casual suit. Later, the newlyweds wore the iconic matching purple outfits for their reception. More than 437 guests attended the wedding reception, which was expected to have cost £500,000.

Prior to marriage, Mr. and Mrs. Beckham declared their engagement in January 1998 following a two-year partnership. On 24 January 1998, David proposed to her at a restaurant in Cheshunt, England. They both started dating in 1997 after the first meeting during a Manchester United match.

How Rich is Cruz Beckham?

Meanwhile, Cruz has not engaged in any kind of profession. But being the celebrity kid, his net worth is over $500 thousand as of today. As of now, he has 1.8m followers on his official Instagram page.

Meanwhile her dad, David, and mom, Victoria shares the combined net worth of $450 million. David has made his fortune from his professional football career and various endorsement deals. While Victoria has earned her worth throughout her work as a singer, fashion designer, model, and businessman.

David scored around $255 million during his final six seasons in the MLS with the L.A including wages, income sharing, endorsements, appearances, and licensing. His annual revenue was about $50 million at Paris Saint-Germain. He was retired in May 2013 after a 20-year career.

Over his entire career, he has played performed for various teams like for Manchester United, Real Madrid, Milan, Preston North End the England national team, and LA Galaxy, Paris Saint-Germain. Today, Beckham works as a co-owner of Salford City. Also, he is President of Inter Miami CF.

On the other hand, Caroline Beckham gained $75 million annually as a member of the group Spice Girls. Not only this but she has made $70 million when Spice Girls reunited for their reunion tour. In 2016 and 2017, she paid off $24.3 million from Victoria's fashion brand and her David's image titles.