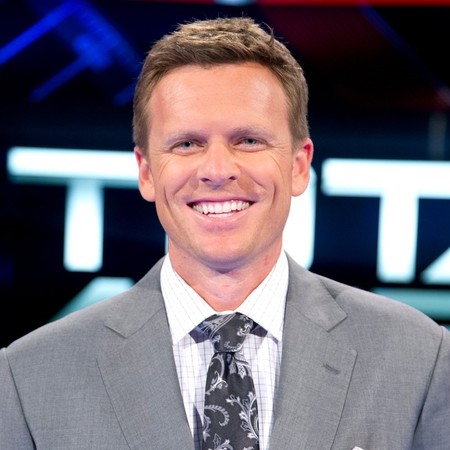 Dan Hellie is an American sportscaster and news anchor. Further, he is a well-known face working for NFL Network along with sports announcer for Fox Sports. Apart, we can see Dan on Dana White's UFC Tuesday Night Contender Series, Tennessee Titans as well as Facebook's streaming college football games. Before anchoring for NFL Network, he used to work as a sports anchor for WRC-TV.

The NFL Network sports anchor, Dan Hellie was born on May 23, 1975, in Manila, Philippines. He along with his parents moved to Gaithersburg, Maryland. His mother was a middle school teacher and his father was a worker at the Interior Department. Dan holds an American nationality and belongs to white ethnicity. He went to Magruder High School, where he used to play basketball, football, and baseball. Hellie was inducted into the Magruder Athletic Hall of Fame on October 26, 2012. Later, Hellie went to the University of Tennessee where he completed his bachelor's degree in broadcast journalism.

Well, Dan, 45, is a married man. He is married to his high school sweetheart turned wife, Anne Hellie. The couple met for the first time while studying in high school and started to date each other. However, the love birds got married after dating for several years in a private ceremony.

Since then their wedding, the duo is living a happy life and also shares a strong bond between them. Besides, Dan often shares a lovely and adorable picture of his family on a social media account. Apart, Dan and his wife are blessed with two children.

The couple became parents for the first time with a baby girl, Caroline Hellie. Later, they also share a second child as a baby boy, Chase Hellie. However, their children's date of birth is not known yet. Moreover, Dan is living a happy life with his wife and two children in Manhattan Beach, California.

Dan is one of the popular sports announcer and NFL Network sports anchor. So, he might have earned a hefty amount of money. Furthermore, Dan has an estimated net worth of $2 million which is similar to Doug Kammerer.

On the other hand, he earns an average salary of $350,000 per year as an NFL Network anchor as per some sources. Besides, he also earns extra money as a Fox sports announcer. As of now, he is living a healthy and wealthy with his wife and two children in Manhattan Beach, California.

The talented and hard-working, Dan started his career as an editor, producer, and reporter in Alexandria, Minnesota. Later, Hellie moved to Florence, South Carolina, as a sports reporter-anchor for WPDE. Besides, he also worked in WPTV and WETV before starting his career in WRC-TV in Washington D.C. in 2006.

Back in 2011, he was horned with Emmy Award for Outstanding Sports Anchor and Outstanding Daily or Weekly Programs. Hellie also hosted the Redskins Coaches. However, Dan is currently working as a sports anchor for NFL Network along with Fox News. Back in 2017, Hellie also joined UFC's Dana White's Tuesday Night Contender series. He teamed with Snoop Dogg and UFC Hall of Fame Inductee Urijah Faber on the series.