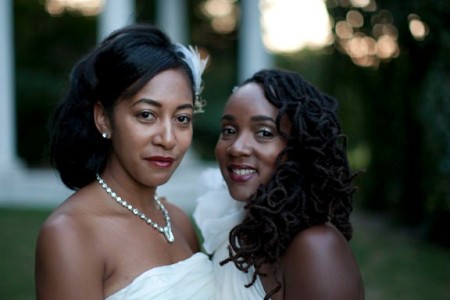 Over the past few years, there has been a lot of improvement in gender equality. People now have the courage to express their identity, and we must not forget those who made this possible. Among them is a fierce woman named Danielle Moodie-Mills.

The 40-year-old, Danielle, is an accomplished political analyst and social entrepreneur who advocates for the LBGTQ community. Since her marriage to a famous political strategist, Aisha Mills, the couple has been more actively involved in providing justice to the LGBTQ community.

Since the couple rarely talks about their personal life, many people are curious to find out about their status. So, are they still married? Do they share any children? Let's find out!

Danielle and her wife, Aisha, has been married since August 7, 2010. The same-sex couple celebrated their tenth wedding anniversary in 2020. Despite being together for so long, Danielle and Aisha still has no children. In the future, they might welcome a baby through adoption or surrogacy.

Like Danielle, Aisha has led multiple campaigns that build political power for LGBTQ and racially discriminated people. She played a vital role in the 2017's historic Year of the Trans Candidate.

Her marriage to Aisha became a Cultural Milestone

The couple exchanged their wedding vows in an interfaith ceremony, which took place at Orchard Hill at Old Westbury Gardens, Long Island, New York. Previously, they had applied for a marriage license on March 3, 2010.

Danielle and Aisha are the first same-sex couples to apply for a marriage license in Washington, D.C. Further, their wedding became a major headline in the town and the state. Likewise, their union became a cultural milestone in the fight for LGBTQ equality.

It was the first lesbian wedding ever featured by Essence magazine. For featuring their big day, Essence earned its first GLAAD Media Award. A young actress, Kiki Sukezane, is also in a lesbian relationship.

Aisha Moodie-Mills was the first African-American woman to lead a national LGBTQ organization. She served as the President and CEO of the LGBTQ Victory Fund and Institute.

Aisha, as the president of the marriage equality campaign, led the successful fight for marriage equality with her partner in D.C. in 2009. The couple has been recognized with multiple awards as the Top LGBTQ Influencers.