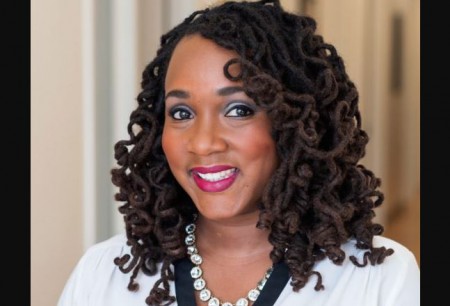 With the rising issue of gender equality and human rights, we must address the LGBT community as well. And today we will discuss Miss Danielle Moodie-Mills, who is an advisor for LGBT Policy & Racial Justice at the Center for American Progress. Similarly, she is the Director of Education Advocacy at the National Wildlife Federation.

Danielle was born on November 10, 1979, in the United States. As of 2019, she is 39 years old, and her birth sign is Scorpio. She belongs to Jamaican-American heritage. Currently, Danielle works as a CEO of Politini Media, a boutique communication strategy firm.

Mills earned her Bachelor's degree in Political Science and Government from the Marymount University. Similarly, in 2006, she graduated with a Masters in Education, Special Education and Early Childhood from George Mason University.

The host of a radio podcast called, WokeAF at SiriusXM, Danielle Moodie has a net worth of $1 million as of 2019. She earns a massive income from her career as an activist, advisor, and as a director of few organizations.

Additionally, Danielle is a social entrepreneur and policy analyst with more than a decade of working experience. Likewise, she is currently an Advisor with the "Fighting Injustice to Reach Equality," or FIRE, initiative that she launched with her wife, Aisha, at the Center for American Progress.

Talking about Moodie's annual salary, she might earn over $200,000 from her diverse profession. The average salary for an advisor is around $75,000, and a host of a radio talk show earns around $30,000. In the case of Moodie, she is involved in other ventures as well. Therefore, we can assume that Moodie has a desirable income.

Danielle Moodie is a married woman, and she is living happily with her soulmate Aisha Mills. Together the lovebirds have been married for over nine years. Aisha, herself is a prominent woman. She is a seasoned political strategist and social impact advisor with twenty-years of working experience.

Danielle and her wife, Aisha, were instrumental in bringing marriage equality to the District of Columbia. As president, Aisha led the marriage equality campaign to victory. Together the couple fights for the right of LGBTQ community and racism.

Currently, Danielle and Aisha produce and host “Politini,” a politics and pop culture show on blis.fm.

How did Danielle and Aisha meet?

Danielle and Aisha were first introduced by their mutual friend back in 2009. During that time, both were coming out of their past failed relationship. Both Mills and Moodie agree to the fact that they immediately fell in love at first sight.

In an interview, Danielle revealed about her life-partner saying:

“Out of seven billion people on this planet, I’ve found someone that makes me feel like I want to live, and not just live, but live out loud and love out loud."

Danielle and Aisha married on August 7, 2010, and their nuptial was performed in an interfaith ceremony at Orchard Hill at Old Westbury Gardens, Long Island, New York.

Their marriage became a Cultural Milestone for LGBTQ

When Danielle and Aisha were married, their wedding became a major headline in the town. Afterward, their marriage became a cultural milestone in the fight for LGBTQ equality.

Danielle and Aisha: Idol of LGBTQ

For their efforts, both Moodie and Mills has been named one of The Root’s “Washington Power Couples." Further, they have been named as The Root’s "Top 100 African American Trailblazers." Likewise, both also have been featured as one of the Advocate’s "Top 40-Under-40 National LGBT Leaders."

When asked about the future leading candidate, Danielle said she supports female personalities like Kamala Harris, Oprah, and Cory Booker.

In conclusion, we now know full details about Danielle Moodie-Mills. She is a prominent figure of the LGBTQ community. To know about your favorite idols, we suggest you follow marriedceleb.com.