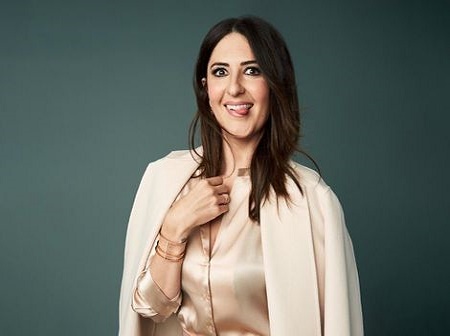 If you are one of the fans of the NBC series, The Good Place then you must be familiar with D'Arcy Carden, who is playing the role of Janet from 2016–present. She is an American actress and comedian who is also famous for American dark tragicomedy television series, Barry.

The comedian was born on January 4, 1980, in Danville, California, the USA as D'Arcy Beth Carden to the father, Dennis Erokan, and mother's maiden name is Lori Angelfire. She is American and is of mixed ethnicity.

The 39-years-old comedian is a happily married woman. She tied the wedding knot with her soulmate, Jason Carden, on July 31, 2010, at an intimate ceremony.

Shortly after marriage, the duo of wife and husband moved to Los Angeles, California, in 2013 from New York City. Moreover, they are together for nearly one decade, and day by day, their marital life is just getting stronger and better. As a matter of fact, Carden previously met her now-husband on a trip to Disneyland with mutual friends and soon started dating.

From their conjugal life, the couple is yet to welcome their offsprings. They, however, have one family member named Penny. The actress often shares beautiful photos of their bundle of joy on Instagram.

In July 2018, D'Arcy shared a picture of Penny with a caption which goes like,

"Penny came into our lives two years ago today. Thank you to the garbage family that dumped her at the shelter the month before we found her. YOUR LOSS JERKS!"

For now, the couple sparking their happy life with their only dogs in Los Angeles.

How D'Arcy Carden Rose To Limelight?

D'Arcy Carden is working for the Hollywood industry since 2004. She initially worked for the Upright Citizens Brigade as an improve comedian and also an improvisational sketch comedy group such as The Curfew and Stone Cold Fox.

Carden joined UCB and also toured with the UCB Touring company in 2014. The actress who has found fame with her role as Rhonda Basmati in the comedy series Rhonda Casting from 2009 to 2011. Also, she starred in the series Inside Amy Schumer and Comedy Bang! Bang from 2013 to 2015.

Since 2016, Carden is playing the lead role Janet in NBC's comedy series The Good Place, alongside Kristen Bell, Monica Padman, and others. Now, she is playing the role of Natalie Greer on HBO series 'Barry,' which premiered on March 25, 2018.

D'Arcy talks about impersonating her cast-mates on The Good Place, check out the video,

As an actress and comedian, D'Arcy Carden makes a suitable amount of money through her phenomenal acting career. Her net worth is around $2 Million as of 2019. Apart from a TV career, she does TV commercials and modeling, which surely earns her a decent paycheck.

Craden has made tremendous assets through her famous role in hit TV series like Barry and The Good Place. As per payscale, the cast member The Good Place makes around $225, 000 per episode. Thus, Carden probably receives a salary in a similar range.