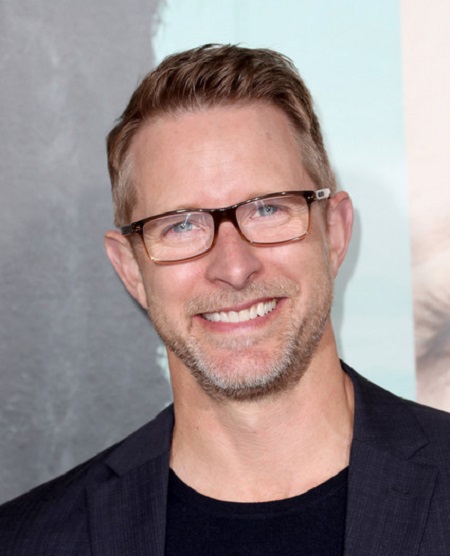 David Monahan is an American actor, writer, producer who is best known for playing the role of Detective Matt Seely on the TV drama, Crossing Jordan in 2006. However, he gained worldwide popularity when he starred as Tobey Barret in Dawson's Creek and as Bernard in Big Little Lies.

David Harold Monahan was born on August 13, 1971, in North Olmsted, Ohio, United States. However, there is no information regarding his family background in the media. He attended Bishop Denis J. O'Connell High School. Later he graduated from Harvard University with an honor degree in government. He holds American citizenship and is of white ethnicity.

Who is David Monahan Married to?

The TV actor who is openly gay is happily married to his long term partner Larry Sullivan, born on September 10, 1970. He is an actor who is known for his role Robert in NBC television series Will & Grace.

The gay couple, Sullivan and Monahan have been relishing their marital life for a long time. To date, there is no information regarding their actual marriage date or their love story on the press.

But, here comes to know they are happily married for 16 years from Larry's Instagram post from July 8, 2017. It means they have now completed their 20th year of marriage.

More joyfully, the married duo is blessed with one adopted son whose name is Cooper. Today, they are enjoying their parenthood happily.

According to David's Instagram post, Cooper was born on August 29, 2012.  In the post, the proud gay father Monahan wished Cooper on his 7th birthday with the sweet caption: " Our sweet, stubborn, thoughtful, opinionated, creative, resilient son turns 7 today".

He also thanked Tisha Parks, for the greatest gift that they will ever receive. Thus, the lovely couple is very much in love with their son.

Also, mostly they post hanging out images at various places with Cooper on their respective Instagram walls. Furthermore, David and Larry featured in Campbell's Soup advertisement in 2015 with their son.

How Much is David Monahan's Net Worth?

Working as an actor, David Monahan maintains a good amount of profit. Meanwhile, his actual amount of net worth has not been mentioned anywhere, it is estimated to be more than $800 thousand. His income source of income is his professional career by acting in many TV shows and films.

Meanwhile, in the United States, the average actor/performer wage is around $57,140. Thus, Monahan could also make income within the same range. He has also been included in the best television shows such as Supernatural, Crossing Jordan, and actually Big Little Lies. So, this could mostly help to earn fame in his long-term career.

Throughout his career, David has performed on various television series and as well as films. In 2000, he made his first debut as Tobey Barret in TV series Dawson's Creek.

Since then, he has acted in different TV series like The Geena Davis Show, Sabrina, the Teenage Witch, Crossing Jordan, Supernatural, The Dark Knight Rises, Big Little Lies, etc.

Besides that, Monahan has also performed in movies like The Dark Knight Rises, Hopeless, Something New Bill Labree, Late, etc.