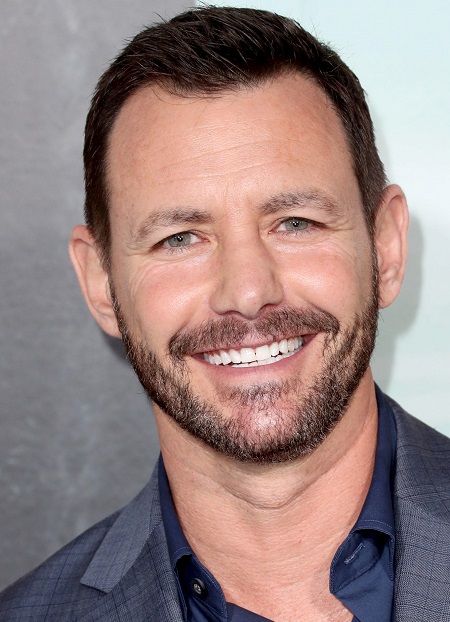 Larry Sullivan is an American Film and TV actor who got worldwide popularity after starring in TV series, Will & Grace as Robert in 2001. Added to that, he is also for his roles including as Andy Akers in CSI: Crime Scene Investigation (2003-2014) and as Oren Berg in Big Little Lies (2017-2019).

Lawrence Edward Sullivan, Jr. was born on September 10, 1970, in New Haven, Connecticut. He is the son of Lawrence Sullivan (father) and Sheryl Sullivan (mother). He holds American citizenship and belongs to the white ethnicity.

Who is Larry Sullivan's Husband?

He is none other than, American actor, David Monahan. He was born on August 13, 1971, as David Harold Monahan North Olmsted, Ohio. He is known for his works including Crossing Jordan, Dawson's Creek, and The Last Supper.

The gay couple, Sullivan and Monahan have been relishing their marital life for a long time. To date, there is no information regarding their actual marriage date or their love story on the press. But, here comes to know they are happily married for 16 years from Larry's Instagram post from July 8, 2017.

It means they have now completed their 20th year of marriage.

Larry and David Are Happy Parents Of One Son

More joyfully, the married duo is blessed with one adopted son whose name is Cooper. Today, they are enjoying their parenthood happily.

According to David's Instagram post, Cooper was born on August 29, 2012.  In the post, the proud gay father Monahan wished Cooper on his 7th birthday with the sweet caption: " Our sweet, stubborn, thoughtful, opinionated, creative, resilient son turns 7 today".

He also thanked Tisha Parks, for the greatest gift that they will ever receive.

Thus, the lovely couple is very much in with their son. Also, mostly they post hanging out images at various places with Cooper on their respective Instagram walls. Furthermore, David and Larry featured in Campbell's Soup advertisement in 2015 with their son.

How Much is Larry Sullivan Worth?

Well, Larry Sullivan has accumulated a fair amount of money through his successful career of working as an actor. He has been in the entertainment industry for over two decades. As of early July 2020, he as an estimated net worth of more than $1 Million.

Whereas an American actor earns an average annual salary of $56,662 in the United States. His earnings, therefore, have to be in the same category. Nevertheless, his best acting credit is the TV show, Will & Grace, so his characters could get a decent paycheck.

Aside from acting, Larry was a part of the Broadway musical Miss Saigon's First National Tour. Not only this but he starred at Noah Wyle's The Blank Theatre Company in the West Coast Premiere of Hello Again by Michael John LaChiusa.

Over Two Decades in the Hollywood

Throughout his entire career, 49, Sullivan has made appearances in various television series and movies. He made his first debut through Beverly Hills, 90210 as Bernie Torgov from 1996 to 1998. Before that, he also starred in two series Dream Trap and The Night Brings Charlie in 1990 but both are uncredited.

Then in 1997, Larry won his first recurring role as Dylan Wordsworth in the CBS soap opera The Young and the Restless. He has since worked on tv shows such as Criminal Minds, The Crazy Ones, Scandal, Argo, Castle, Zoey 101, NCIS, and so on.

His movies credits are Aftermath, Rush Hour, Catwoman, Evan Almighty, Straight Outta Compton, and among others.