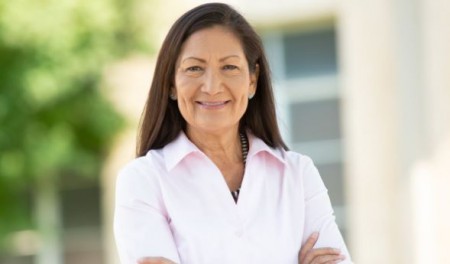 In this 21st century, where gender equality has been a major issue, we have seen many female personalities taking over a higher position in every field. And today we are going to talk about Deb Haaland, who is serving as the U.S Representative from New Mexico's 1st congressional district. Further, she and Sharice Davids are the first two Native American women elected to the U.S Congress. US senator Kamala Harris is also one of the few crucial political figures.

Who is Deb Haaland?

The 58-year-old, Deb Haaland is an American politician who is a former leader of the Democratic Party of New Mexico. Recently on March 7, 2019, Haaland became the first Native American woman to preside over the United States House of Representatives.

Haaland was born as Debra Anne Haaland on December 2, 1960, in Winslow, Arizona, the U.S to a military family. Her father Major J. D. "Dutch" Haaland was a 30-year combat Marine who was awarded the Silver Star Medal for saving six lives during Vietnam. Meanwhile, her mother Mary Toya is a Navy veteran who was a federal employee for 25 years in Indian education.

The former tribal administrator for the San Felipe Pueblo, Miss Deb Haaland has a daughter from her previous relationship. She was pregnant with her daughter during her college days. At that time, Deb was 34 years old. Currently, the mother-daughter duo has a strong relationship.

Deb Haaland as a single parent

Haaland hasn't shared the details about her husband. Also, it is not known whether she was married or not. In an interview, she revealed that she was a single parent for nearly three years after her daughter was born in 1994.

Deb's daughter, Somah Haaland, was born on May 20, 1994, four days after her mom's graduation. For the first three years, Deb and her daughter spent 24 hours a day. When Somah was two years old, Deb opened her Salsa company. The mother-daughter duo used to travel all around New Mexico delivering salsa across the stores.

As a single mother, Deb volunteered at her daughter's preschool in order to afford an early childhood education. With her support, Somah has now graduated from the University of New Mexico.

Who is Somah Haaland's father?

As mentioned, Deb hasn't revealed about her husband, but she later found a good-hearted man to raise her daughter. However, there are no additional details about him.

On June 16, 2019, Deb's daughter shared a sweet message to her dad, who adopted her when she was three years old. She wrote on the caption:

"Happy Father’s Day to all of the parents who decide to raise kids who aren’t biologically theirs. I love my dad so much and I am thankful for him every day."

As of now, Somah and her dad have a loving relationship. It is not known whether Deb also spends time with him. Nevertheless, the family has a positive and healthy bond.

As of 2019, the former leader of the Democratic Party of New Mexico, Deb Haaland, has a net worth of $1 million. She is a renown politician who currently serves as the U.S Representative from New Mexico's 1st congressional district. Politician such as Bernie Sanders and Ayanna Pressley also has a higher amount of net worth.

Throughout her career, Haaland has amassed a decent amount of earnings. However, she did a lot of struggle to reach this position. Do you know after two years of her daughter's birth, Deb ran her small business producing and canning Pueblo Salsa?

How much is Deb Haaland's Salary?

Outside their annual income, representatives also earn additional compensation for personal services that they have done. Additionally, House members have access to retirement programs through the Federal Employees Retirement System, which includes the Basic Benefit Plan.