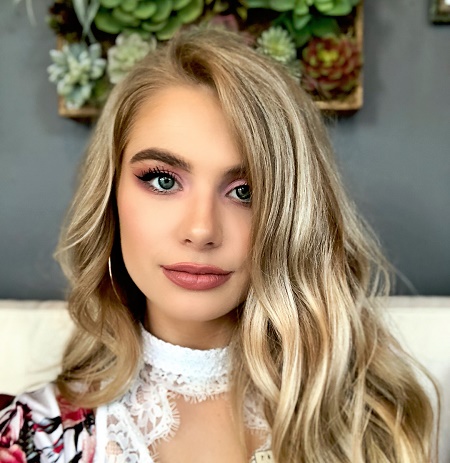 Demi Burnett is an American television personality and model who became famous after starring as a contestant on The Bachelor's season 23 . Since being eliminated from the show by Colton Underwood during season 6, she started appearing on season 6 of Bachelor of Paradise.

She was born on February 21, 1995, in Texas, the United States to the mother Tina Jean Jordan while her father's name remains private. She holds American citizenship and belongs to the white ethnicity. As far as her education, she studied at Texas State University, where she was a member of the Zeta Tau Alpha sorority.

Yes, the Bachelor Nation alum who came out to the world as bisexual on July 22, 2019, Demi has found a new man in her life. He is none other than, Slater Davis, who is a musician.

The new couple has been together for a couple of months. At first, the 25 years old Burnett introduced her new beau through Instagram. She shared the photo with Davis celebrating her 25th birthday together, sharing a smooch over dinner on Friday, February 22.

She captioned the picture: “The present I never knew I needed". That same day, the singer Slater also posted images of them on Sunset Boulevard in Los Angeles calling her "babe." Since they frequently share various hanging out pictures on their respective accounts at different locations.

In the midst of the pandemic, Demi and Slater are staying together at Davis 's house with his family, so there is much to do for them. As Demi says, she enjoys the quality time with him by enjoying the hit video game, Animal Crossing, using the pool, playing sports, and other indoor activities.

Now, the two are really comfortable with each other despite having some different interests.

Was Engaged to Bachelor in Paradise' star Kristian Haggerty

The 5 feet 3 inches tall TV star had ended her engagement with Kristian Haggerty, 27, on October 31, 2019. In a joint Instagram post with long captions, the exes revealed their separation where they claimed that their priority is to do what is best for them.

"But we remain committed to encouraging each other, supporting each other and continuing forward in a way best for us, they added last. Likewise, the former couple had engaged over the summer in 2019 on BiP season 6 finale. Their engagement proposal made history as part of the Bachelor Nation's first same-sex couple but sadly could not become the married duo.

Since their division, they've remained tight-lipped over the reasons behind their broken dedication. Both of them have moved with their new partners. Meanwhile, Burnett's ex-fiance Haggerty is dating YouTube star Taylor Blake since Feb. 2020.

As a reality television star and model, Demi Burnett has herself accumulated a good amount of money. As of 2020, her exact net worth has not revealed anywhere, but it is estimated to be over $800,000 which is more than Scheana Shay. Her source of revenue, she receives much of her wealth mainly from her career in acting.

Now, Burnett's starring in Bachelor of Paradise so her salary is about $8,000 per season, unlike Jade Roper and Tenley Molzahn. She also receives extra from her role as a model. Before that, she used to work as an interior designer in Texas so she must have received a significant amount.