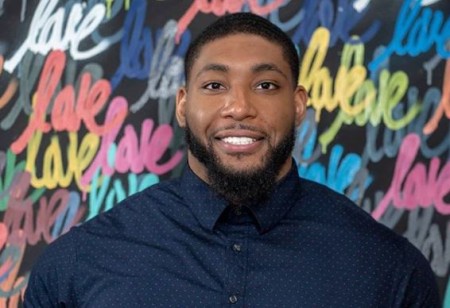 Devon Still is a former American football defensive end who has played for Cincinnati Bengals, Houston Texans, and New York Jets in the National Football League (NFL). Currently, he works as an entrepreneur, motivational speaker, and advocate for childhood cancer awareness.

Devon Joshua Still was born on July 11, 1989, in Camden, New Jersey, the United States. He was born to parents, Melissa A. Sangare (mother) and Antonio D. Still, Sr. (father). He attended Howard High School of Technology and was a standout lineman for the Howard Wildcats high school football team. Afterwards, Devon graduated with a degree in Criminal Law and Justice from Penn State University.

The 31-year-old former defensive end Devon Still has been married to his wife, Asha Joyce since 2016. They first met in 2012 at a mutual friend's party, and in summer of 2014, the couple got engaged. After a few weeks, Still's first child, Leah was diagnosed with Neuroblastoma stage 4 cancer. Therefore, Devon and Asha hold their wedding.

Two years later, Devon and Asha tied their knot in a beautiful ceremony on May 13, 2016. Their marriage took place at the New York Public Library in New York City. Further, TheKnot.com chose Still and Joyce as the recipient of 2016's Dream Wedding.

For her big day, Asha wore an embellished white gown with a flowing train and veil. Meanwhile, Devon looked sharp in a black tuxedo. Meanwhile, his daughter, Leah, served as the flower girl. As of now, Still and his wife, Joyce has been married for over four years.

Five years after Leah's diagnosis, Devon and Asha announced they were expecting a baby. Well, Leah is Devon's first child from his previous relationship. After struggling to conceive for several months, Still and his wife chose Clearblue Connected Ovulation Test System which helps to track the pregnancy cycle.

Finally, the couple welcomed their first child, a baby daughter named, Aria Marie Still on August 31, 2019. The family of four is happily living together, while Asha has a strong bond with her step-daughter.

Before Asha, Devon was in a relationship with his high school sweetheart, Channing Smythe. They first met while studying at Howard High School in Delaware. They welcomed Leah on May 6, 2010. Channing works as an interior designer.

As of now, Devon and his ex-partner, Channing are still good friends. When Leah was diagnosed with cancer, Channing stayed by her side. Also, she founded "Leah Still Foundation" in the name of her daughter.

Back in 2015, Channing and Devon reached a financial agreement as Leah's mother needed more money. As she stayed through Leah's diagnosis and treatment, Channing couldn't work.

The former Cincinnati Bengals defensive end, Devon Still has a net worth of $3 million as per celebritynetworth. He played for Bengals from 2012-2014. Still's salary in the 2014 season was $570,000. However, he sacrificed his career to take care of his daughter.

Since after retiring from his professional football career, Devon has been working as a motivational speaker and childhood cancer awareness advocate. He is an author of a book called, "Still in the Game." He runs a podcast along with his wife and the couple has a YouTube channel named, "Still Squad TV." Unlike Still, former NFL player, Beasley Reece has a net worth of $12 million.

Determined to save his daughter's life, Devon spent three weeks sleeping next to his daughter at the hospital. At the time, Still, himself was recovering from back surgery. Further, the Bengals permitted to sell Devon's jersey to raise awareness for pediatric cancer.

Devon announced in November 2015 that his daughter was in remission with no signs of cancer. Likewise, in January 2016, he announced that Leah remained cancer-free and she is now healthy and happy.