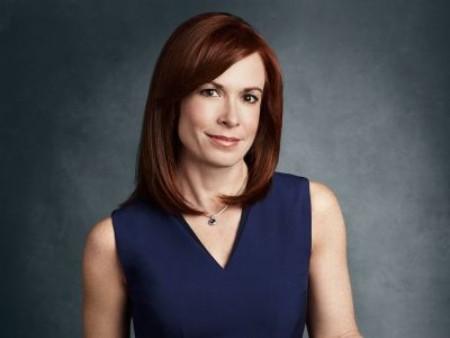 Emmy Award-winning news reporter Diana Olick is well known for her outstanding work as a correspondent for the CBS News talk-show, CBS This Morning. She is also a prolific contributor for the largest-business and news channel, CNBC, which won the Gracie Award. She is currently serving as a real estate correspondent for the CNBC channel.

Olick was born as Diana M. Olick in New York, United States to Alice and Philip S. Olick. Due to her mixed ethnic background, she speaks Russian and French fluently. Other than that, she is a married woman. Find out more details about Olick's marital life in the following sections.

CNBC correspondent, Olick, is enjoying the happiest moments with her husband, Scott Gold, a marketing consultant for Schieffelin & Somerset. The two walked down the wedding aisle on 27th March 1999, at The University Club, located in New York City, NY.

At the time of their wedding, the bride, Diana, was 31 years old and groom, Scott was 30 years. The married couple is now together for decades and recently celebrated their 20th wedding anniversary on 27th March 2019.

The married couple welcomed twin sons after three years of marriage on 5th April 2002. Diana also wished the 17th happy birthday to her twin children on Instagram on 5th April 2019.

Diana Olick's fortune is $1 Million as of 2019. Similarly, she also makes a subsequent amount from her prolific profession as a real estate reporter as well as a blogger. Besides, a news correspondent at CNBC receives $93,140 as an annual salary, according to Paysa.

Olick currently serves in the news TV series, On the Money, which is rated 7.0 out of 10 by the views of the show and also claimed the highest views where Diana has appeared. Similarly, Sue Herera and Melissa Lee are also on the news program and receive wage leveling Diana.

The prominent correspondent, Diana Olick started her career as a news reporter for the WABI Chanel 5, Bangor, ME, in December 1991. She later worked for the WZZM-TV Grand Rapids from January to September 1993.

The Columbia College graduate reported at the Senate campaign of First Lady, Hillary Clinton during the 2000 campaign. For her notable covering, she, moreover, covered the George Bush campaign as a special reporter for The Early Show.

Olick began reporting for the CBS affiliate broadcast media, KIRO 7, from 1993 to 1994. She further said for the CBS News' news programs like 48 Hours, Sunday Morning, and The CBS Evening News with Dan Rather.

As an author, Olick wrote a book, When Nature's Not Enough: Personal Journeys through In Vitro Fertilization on 1st January 2005. The book is about her personal experiences during the period of pregnancy time.

If You're Fond of Reading, Then Visit Married Celeb!!! To Explore More Biographies & Articles