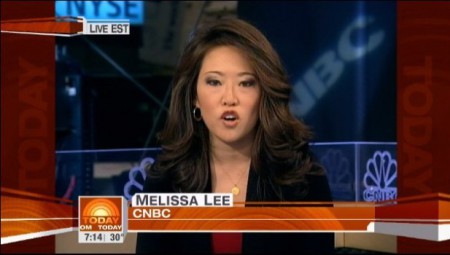 Who is Melissa Lee?

Are you by any chance interested in the trading on the New York Stock Exchange? If Yes is your answer, then you definitely know who Melissa Lee is.

Melissa Lee is an American reporter for CNBC who hosts the show Fast Money and Money in Motion: Currency Trading. Lee started her career in the Journalism from 2004 and is still active in her profession.

The 44-year-old reporter Melissa was born on November 4, 1974, in New York, USA. Melissa has never mentioned her father but we know that he graduated from Columbia University. We can trace Melissa Lee origin to rural China.

So, we can decipher her ethnicity to be Asian but her nationality is American. Melissa completed her education from Harvard College in 1995. Lee completed her degree in Bachelor of Arts in Government and also served as the Assistant Managing Editor of the Harvard Crimson.

Melissa career choice to become a reporter was heavily influenced by the New York News anchor Kaity Tong. Lee started her career in Journalism right after completing her education.

She worked as the reporter for a local newspaper named The Great Neck Record. Furthermore, Melissa provided her services at CNN Financial News and Bloomberg News where Jeff Zeleny also worked. Melissa Lee gained all the fame and attention after joining CNBC in 2004.

At the start of her career in 2004 at CNBC, her background in Finance and her reporting experience helped her to get around. Besides working as Reporter, Melissa also served as a consultant at Mercer Management Consulting.

Melissa Lee's Married Life. Who is her Husband?

Lee has stayed tight-lipped about her wedding details. According to theknot, Lee exchanged the wedding vows with her boyfriend on August 18, 2017.

Though Benjamin is not as famous as his wife Melissa, he does appear on TV some time. If you regularly watch CNBC then you might know about Kallo. Besides this, Benjamin works as a senior research analyst at Robert W. Baird & Co.

Before tying the knot, Melissa and Kallo dated for some good years. The couple first locked eyes five to six years ago but the precise date is not provided.

They went out on a few dates before making their relationship serious. Melissa went to Jungle Safari with her husband as part of her honeymoon trip. According to her, she shared some really good and surprising memories with her husband at the safari.

Melissa Lee's Past Relationship and Her Children

As we've already discussed, Melissa likes to keep her personal life very secret. There are not many details about her past relationship.

With someone like her, it is hard to believe that Melissa was not in a relationship before. Lee might've dated a few men in the past but what we can be sure of is that she doesn't have any children as of now.

This ravishing beauty dedicates her time to fitness and because of that, she has a slim figure. Melissa Lee is a tall figure who reaches a height of 5 feet 8-inch.

Similarly, Melissa possesses an ideal weight of 51 KG. Her hair color is black and so is her eye color.

The estimated net worth of Melissa is around $5 million. Lee's added her wealth mostly from her career as a reporter. Her annual salary is at hundred of thousands of dollars which she receives from CNBC. With her millions of dollars, Melissa lives a luxurious lifestyle like Lisa Marie Boothe.

Apart from her income, Melissa recently added expensive assets to her list. Melissa bought a house in New York City which is pretty expensive. On the current market, the price of her house might be over $676,000.

Not just that, Melissa also added two expensive cars to her assets. The car price ranges somewhere from $200,000 to $1 million.

Lee is also a woman with a golden heart. She contributes part of her income to Vietnam Children Health Care. In addition to that, Melissa also contributes to many charities in the USA.

The Fast Money host is quite big on Twitter. Lee is followed by 104,000 followers on Twitter at her handle @MelissaLeeCNBC. As of 2019, Lee has tweeted 10,100 times and mostly about her work.