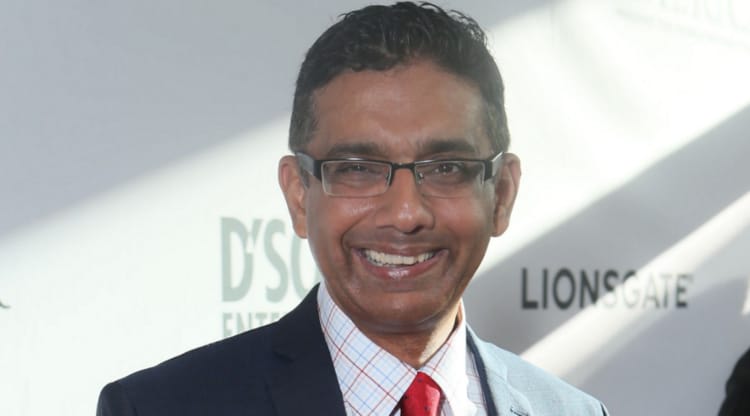 Dinesh Joseph D'Souza is an Indian-born American author, filmmaker, conspiracy theorist, and political provocateur. He is inspiring and spreading awareness through his propaganda which is about the politician's misleading activities.

Born on April 25, 1961, in Bombay, Maharashtra, India, he has completed his education from Dartmouth College and after completing his study, he served as a policy adviser in the administration of President Ronald Reagan. Previously he was married to Dixie Brubaker; Who is he married to now?

Who is Dinesh D'Souza's Wife?

The 58 years old Indian-born American author, Dinesh is a married man. He tied the wedding knot with Deborah Fancher on March 19, 2016.

Their marriage ceremony was held near San Diego but the list of the guest is not disclosed. However, we know that several renowned personalities like Rafael Cruz, father of U.S. Senator Ted Cruz, Gerald Molen, and the Oscar-winning producer of Schindler's List Ben Kingsley attended his big day.

Denish meets with his wife for the first time in the Conservative debate at New York and it did not take a long to change the formal meeting into dating. Deborah is a conservative political activist who emigrated from Venezuela at the age of 10.

Dinesh's wife completed her graduation from New York in Economics and Business Management. She furthermore graduated at the master's level from Harvard University in Business Administration.

Besides Dinesh's great influence in American politics, his wife Deborah initiated her career as a Primary School teacher. After leaving her career behind she, later on, started working with the Republican Group in Texas.

The lovely couple currently resides in New York and they are the parents of two beautiful daughters. However, Dinesh is not the biological father of this two daughters. They belong to Deborah's first marriage.

There are no proper records about Deborah's first marriage but we can assure you that she was previously married. And after her divorce, she married Dinesh.

Dinesh D'Souza was married before and he was married to Dixie Brubaker in a small and private ceremony held in 1992. But the couple did not stick long with together. It is rumored that due to lack of communication they faced long term family disputes.

And when things go out of control they decided to get separated and by the end of 2012,  the registered court finalized their divorce. Before getting separated they had welcomed their first child as Danielle D'Souza-Gill (born in 1995).

Currently, Brubaker and is working as an author and blogger after graduating from Dartmouth College.

The 58-years-old D'Souza is committed towards uplifting American life and he is doing this through his books, films, and political activities.

And So far through his career, he has estimated net worth of staggering $25 million as per 2020. His fame and wealth came through being an author of several books, Film making, political provocateur and conspiracy theory.

His thoughts and political movement are unstoppable and following his movement, he released a film which is known as  America, Imagine the World Without Her. The film grossed $14.4 million, which made it the highest-grossing documentary in the United States in 2014.

His other career breakthrough movement was 2018 where he received a great portion of wealth and stardom with his film Death Of Nation. On its opening weekend, the film grossed $2.3 million. As of August 19, 2018, the film has grossed $5.3 million.

It is obvious that the multi-million dollar owner is living in luxurious a resident and according to sources, his New York apartment costs around $1 million.

Dinesh D'Souza As a Author and Movie Maker

So far he has written more than 20 books which are concerned mainly with American politics.

His books such as Obama's America: Unmaking the American Dream, America: Imagine a World without Her, What's So Great About America, What My Experience with Criminal Gangs Taught Me about Obama, and The Big Lie: Exposing the Nazi Roots of the American are some of his critically acclaimed books.

Dinesh D'Souza's Death Of A Nation

D'Souza creation Death of a Nation had its world premiere in Los Angeles, California on July 30, 2018, which was co-hosted by D'Souza and President Donald Trump's son Donald Trump Jr.

Checkout Why Dinesh D'Souza Sentenced to eight months in Prison?

D'Souza pleads guilty to one felony charge in federal court for the use of a ' straw donor '. The Straw Donor campaign was used to contribute to a 2012 U.S. Senate campaign.

He was sentenced to eight months in a halfway house near his home in San Diego in a five years' probation. He was, furthermore, fined $30,000 after the confirmation of his guilt in a trial.

Later on, In 2018, D'Souza was issued a pardon by President Donald Trump.

Dinesh was born and raised in Bombay in 1961. He belongs from the Roman Catholics family who resides in the state of Goa in Western India. His father was an executive of Johnson & Johnson whereas his mother was a housewife.

D'Souza has completed his education from Jesuit St. Stanislaus and Sydenham College between 1970 to 1976. And it was in 1978 when D'Souza traveled to the United States under the Rotary Youth Exchange and attended the local public school in Patagonia, Arizona.

After completing his education, he served as a policy adviser in the administration of President Ronald Reagan between 1987 and 1988 and In 1991, D'Souza became a naturalized United States citizen.

Stay Tune With Married Celeb To Know More About Your Favorite Celebrity!!!