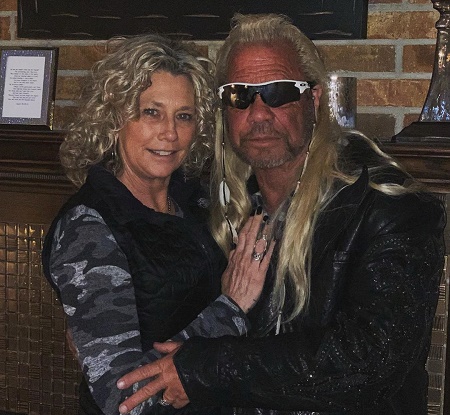 Duane Chapman, aka Dog the Bounty Hunter and his new girlfriend Francie Frane has just started their new chapter. The two reportedly dating each other only 10 months later after the death of Chapman's wife, Beth Chapman.

In March of last year, Bounty hunter Duanne star confirmed that he found his new lover Francie in an interview with The Sun U.S. He explained it's a God friendship, and it's like a miracle.

The 51-year-old Francie has already confirmed their connection by posting pictures of them on Instagram several times. However, Duane, 67, has not reported anything on his own social media until  April 16, 2020, when he shared a photo with France.

"enjoying today’s beautiful weather with Lola the bulldog ♥️ We walk by faith, not by sight. Living our lives in a manner consistent with our confident belief in God’s promises. 2 Corinthians 5:7"

Meanwhile, Dog's daughter Lyssa Chapman from his ex-wife, Lyssa Brittain, seems to be so happy for her dad and his new partner. But the other members of the family could not be more pleased with the new couple.

His daughter Lyssa Chapman, 32, posted a photo of the lovers on Instagram on Tuesday, April 14, 2020, saying, “How cute are these two?.

Similarly, Dog and Frane, a 51-year-old Colorado rancher, have bonded over their mutual sorrow of losing a spouse to cancer. Beth died at the age of 51 last June after diagnosed with stage II throat cancer in 2017.

Furthermore, the Sun reported that they were close as they spoke up about their late spouses' grief. Where, the TV personality, Duane Lee, said:

“Both of us are allowed to talk about our spouses that are in Heaven — it’s not like we’re afraid to mention it or anything like that. We console each other but we also know that we have a responsibility and that is to do this right.

Therefore, they have clearly been dating and interacting with each other for a few months. They are both so happy together for now and good to each other. In fact, France has been very respectful of all children and the memory of Beth.