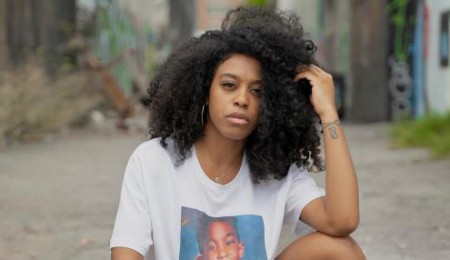 The world of acting is full of surprises, where the drama seems never to stop. We have seen many actors who fell in love on the film set. Some of them openly admit their relationship, while few keep a mystery. One particular actress falls on this category. She is Dominique Perry, actress of HBO's comedy-drama 'Insecure.' She recently made headlines for welcoming a child with her co-star, Sarunas Jackson.

Dominique, who was born on June 22, 1988, in Houston, Texas, US, is 31 years old as of 2019. The actress and dancer rose to fame as Tasha on the HBO series Insecure. Likewise, she has also appeared in the films Get Hard, Cubicle Cowboy and Because I Love You, Roxy.

Perry's mother enrolled her at the Ensemble Theater Young Performers Program at age 7. After high school, she graduated in theatre from the Prairie View A&M University.

She appeared as a model for rapper TI's clothing line, "AKOO," and was featured in Vibe Magazine. Similarly, she also made it as a Jet Magazine's iconic "Beauty of the Week."

Landing a role on Insecure

Dominique moved back and forth from Los Angeles to Atlanta. Perry later moved to Atlanta, and after four years she made a big move by relocating to Los Angeles. Afterward, she ended up bagging the role of Tasha on HBO's popular series, Insecure.

Offscreen romance is not uncommon in the entertainment industry. However, the fling between Perry and Jackson is a bit of a complicated relationship. Although Perry announced her pregnancy, fans were able to know several months later that her boyfriend was her co-star.

So, who is Sarunas Jackson? He is a former professional basketball player who currently stars in the role of Alejandro 'Dro' Pena alongside Dominique on Insecure.

Who knew the two leading actors on a television show was dating behind the camera? Their bonding on the sets became so intensified that the pair eventually had a child.

However, Dominique and Sarunas' affair was so secret that even their colleagues didn't knew. They perfectly managed to maintain a low-profile regarding their relationship.

What about their marriage?

The 31-year-old Perry and the 29-year-old Jackson are yet to be married. Both actors met on season two of HBO's drama Insecure, where they had a recurring role. Their friendship went to next level when Perry was pregnant with Jackson's child.

The HBO"s Insecure co-stars, Dominique Perry and her partner, Sarunas Jackson welcomed their first child; a daughter named Zen Giselle Jackson on May 19, 2018. As of 2019, she is already over one-year-old.

When Perry announced the news of her pregnancy, fans went crazy to know about her partner. Also, they wanted to find out the father of her child. On May 22, 2018, Sarunas took to Twitter with a black and white photo of his newborn daughter. Similarly, Perry also shared a picture but later deleted it.

Although the couple is not married yet, Perry and her boyfriend, Jackson, are taking their parents role exceptionally well. The couple attends parties, vacations, and programs together.

On August 20, 2019, Sarunas and Dominique with their daughter attended a program organized by Kids Foot Locker. Let's hope that they will get married soon.

As of 2019, Dominique Perry has a net worth of $500,000. She is an actress, and throughout her career, Perry has amassed a giant net worth. She appears on the HBO's hit series, Insecure.

Meanwhile, her partner, Sarunas, has an estimated net worth of $1 million as of 2019. Being a former basketball player and currently as an actor, he ha amassed a giant net worth. Similarly, his annual salary is over $150,000.