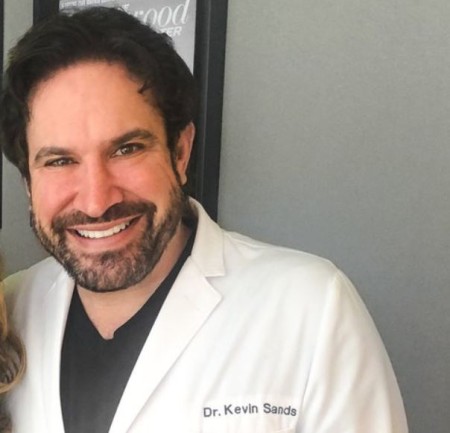 American cosmetic dentist, Dr. Kevin Sands is well known as the owner of the Kevin B. Sands DDS, INC. He is also notable as one of the world's leading cosmetic dental specialists by Beverly Hills Cosmetic Dentist of the Stars.

Sands offers excellence in cosmetic dentistry to his customers due to his quality care and empathetic nature. Apart from his profession, he is a happily married man.

Dr. Kevin Sands is married to an American television personality, Alana Sands on 4th May 2007 at the Greystone Mansion (also known as the Doheny Mansion) in Beverly Hills, California. The pair wedded in the presence of their families and friends.

The couple is together in their marital relationship for more than a decade and still shares their company. Recently, Kevin's spouse wished a happy anniversary to him for twelve years of marriage.

How The Celebrity Doctor Met His Wife?

Sands had his first encounter with his wife, Alana while working on the office, Kevin Sands DDS, Inc where she came for a dental checkup in 2005. Shortly they interacted and started dating.

After being together for years, Kevin proposed her with a beautiful diamond ring and they engaged in an intimate ceremony. Moreover, they are together since then without any sign of separation.

Kevin and his sweetheart share three adorable kids; they welcomed their oldest son, Emerson Sands in 2008. After two years, they became parents for the second time with the birth of a son, Ryder Sands born on 5th March 2010.

More to that, Dr. Kevin blessed with his youngest son, Cruz Sands in 2016. His wife often shares kids pictures on her Instagram. As of now, the family of five is living a blissful life in Beverly Hills.

As a matter of fact, in 2013, Doctor has three nannies for her two kids, two masseuses, and full-time chef because the duo was pretty busy with their respective career.

Currently, Alana appears on Netflix's Celebrity Plastic Surgeons was former cast of ABC popular reality show, Plastic Wives of Beverly Hills. She shares the screen along with other plastic surgeon wives; Veronica Matlock, Danya Devon, and Frances Marques. Also, she made an appearance in many TV shows related to plastic surgeries like Totally Baked.

Dr. Kevin Sands maintains a lucrative bank balance, collecting a handsome amount from her works. He has a net value of $20.5 Million as of 2019. Likewise, he earns an impressive salary in the range of $2 Million to $2.5 Million per year. Back in 2015, his total net worth was $18 million.

On the other hand, his wife, Alana, holds a net worth of $5 million from her career as a TV star. So, altogether, husband and wife duo has a total net worth of $25.5 million. Further, they owned an expensive villa at Beverly Hills, which cost millions at the market.

Varieties of celebrities prefer to visit his clinic for dental checkup weekly, for example, Paul Schulze, Emi Canyn, and Terry Crews, among others. Currently, he is living a luxurious life relishing a hefty sum of money from his profession.