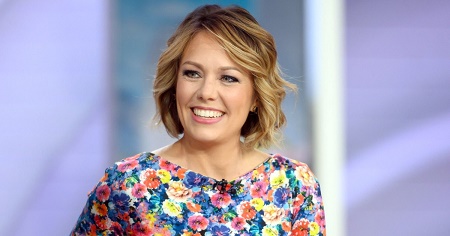 One of the renowned American television Meteorologist and News presenter, Dylan Dreyer gains the people's attention for her excellent capability to mesmerize the audience through her hosting. Let's glance over her short biography with marital details.

Dylan Dreyer is famous for hosting NBC News as a meteorologist. As of today, she serves for the Weekend Today, MSNBC on weekends, NBC News weather girl and  NBC’s ‘Weekend Today’ meteorologist for Orange Room.

Dylan Dreyer was born on 2nd August 1981 as Dylan Marie Dreyer in Manalapan, New Jersey, the USA. Further, she was raised her father, Jim Dreyer as the youngest child along with two brother James and Mike. She is an American by citizenship and is of white ethnicity.

As far as her education, Dreyer completes her graduation from Rutgers University in the year 2003 with a bachelor's degree in meteorology.

The NBC News Host, Dylan Dreyer is wedded to her boyfriend turned husband, Brian Fichera. Her husband Brain is a technician who works for Nightly News as a cameraman.

When Dreyer Met her husband, Fichera?

At the first time, Dreyer met Fichera while they both were working at the morning shift of WHDH TV station. After the few meeting, they first became best buddies and developed their relationship. Then, the two started hanging out together along with their friend and formed an unbreakable connection.

Subsequently, Brian proposed Dylan on July 2011 with an engagement ring in front of her parents’ house in Easton, Massachusetts.

After more than a year of engagement, Dreyer and her partner, Fichera shared the wedding vows on 6 October 2012. The wedding ceremony was held at the Cathedral of the Holy Cross in Boston.

Furthermore, the couple also celebrated their 6th wedding anniversary recently on 2018. Seem, they still have the same phase as before. Till date,  there are no rumors of their extramarital affairs and divorce as well.

After the blissful married life, this beautiful duo welcomed their firstborn child, Calvin Bradley Fichera on 17 December 2016. Now, as a happy couple, Dylan and Brian grew up together, co-parenting there 2-year-old and traveling around the globe as often as possible.

Recently, it was revealed that they are expecting their second baby. She confirmed her pregnancy news on 12 July 2019 with PEOPLE magazine, and a baby gender is revealed to be baby. Currently, the couple is awaiting the birth of their second child.

Dylan Dreyer's net worth is estimated to be $4 Million as of 2019 throughout her career in the field of journalism, which is way higher than journalists, Laura Garcia, and Katy Blakey. The significant way of income for her is her posts as a new representer and meteorologist.

Till date, Dreyer has worked im famous TV channels including  WHDH-TV, Today, WICU, WJAR, Today Show, and WHDH as a  weather correspondent. To sum up, she was always enthusiastic about her job and gained a great fortune in the process.

Since  September 2012, the American meteorologist has been earnings the payroll from her job as a host of the NBC. Her annual wage is reportedly around $300 Thousand.

The news reporter has brought a beautiful house in New York City, which worth is around $2.3 Million. Further, there is no data regarding her cars.